I’m going to keep this short as I’m completely drained at the moment. As you are probably aware, we were at the Cleveland Clinic this afternoon in order to get an evaluation for childhood disintegrative disorder. If you new and need to get caught up, see this post and you’ll pretty much be up to speed. We didn’t have to wait very long after we arrived to be seen.

Gavin was however, very…….um…..talkative. Honestly, he just would not stop talking and it was mostly random, unrelated thoughts. When we met with the pediatric neurologist, she didn’t seem to know why we were there. I was a bit confused by that but she was very interested so everything was okay there.

We went over Gavin’s entire life. That was quite overwhelming because Gavin’s history is very complex and confusing. Basically, everything that the doctor wanted to perform, as far as diagnostic tests are concerned, has already been done, in some cases multiple times. The only remarkable finding was reduced electrical activity of the left temporal lobe.

Keep in mind that she is a world class pediatric neurologist and she essentially said that she has absolutely no idea what’s going on with him. She said that saying Gavin is extremely complex is an understatement. Essentially, because we have been so diligent over the years and in leaving no stone unturned, she’s not sure what else there is to do. 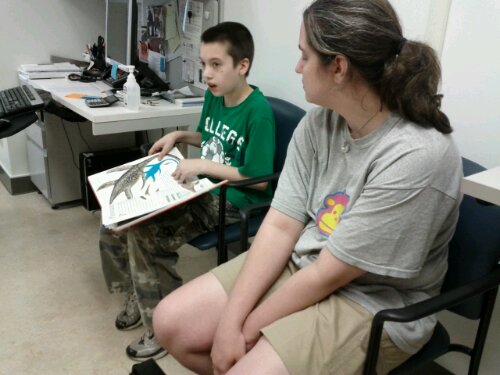 After we went over the bastardized version of his medical history we were able to put together on short notice she physically examined him. This is were the concern comes in.

I’m just going to cut to the chase….. I don’t have anything left for anymore details right now.

Basically, upon examination she discovered that Gavin has no reflexes anymore. She actually pulled another doctor into the room. It just happened to be Dr. G, Gavin’s movement disorder specialist (also a pediatric neurologist) from earlier in the year. This actually worked out well because it gave us a baseline from about 7 months ago.

I ask the obvious question, what does this mean? She said that it could be some sort of peripheral neuropathy. She said it could also be a neurological disease, or even maybe a muscular disorder. Either way, this is not good news. This could also explain why Gavin is appearing to be becoming more and more clumsy…for lack of a better word. He is constantly dropping things anymore and tripping over his own feet.

She is going to be conferring with her colleagues over the next few days and will contact us before this Friday and hopefully have some answers or a least a direction for us to go in. She said that, unfortunately, sometimes we can’t isolate the problem and it will remain a mystery.

WTF, is all I can say right now. WTF, WTF, WTF……. Honestly, what are the odds that this would actually happen.  We went up there for childhood disintegrative disorder and not only walked away with more questions then we had to start with but now we are looking at some type of neurological disease or neuromuscular disorder as well…..and we still don’t know about the whole childhood disintegrative disorder thing either.  WTF, WTF, WTF…………..yup..that about sums it up.

It’s times like this that I question if I have what it takes to do this. I’ll be completely honest with you and please pardon my French. This absolutely scares the shit out of me. How are we supposed to help him? OMG….my head is going to explode……. This is going to be the longest week of my life. We have way to much going on right now already and this will likely be bumped to a top priority, followed closely by locating a school for Elliott and a school for Emmett….before August.

Thank you everyone for all the emails and support. I would ask that you please keep my family, especially Gavin in your prayers.

Wow…Gavin doesn't like to do things by halves, does he? Thinking of you guys.

Julia, have you any experience with kids losing their reflexes.?

I usually have the opposite problem! Kids I see often retain primitive reflexes (the ones babies are born with) that we're then trying to integrate…I don't really work with kids with neuromuscular conditions but I'm going to ask around a few colleagues. You know I had a dream the other week about treating Gavin? Lizze, Elliot and Emmett were there too, your blog really does touch people!

Well we could most definitely use your services as their speech therapist just quit and the OT is going on maternity leave.

Anyway you are right, Gavin never does anything half way. 😉

With the whole autism/mito connection, could it be mitochondrial disease/dysfunction? I have seen people very quickly go down hill, physically, from that. I hope you get answers soon.

Thanks Jen. Most of that has been ruled out but they arebgoing to dig a bit deeper. Nice to hear from you again. Hope all is well.

Sorry Rob I am just now reading this article…I'm always a day late and a dollar short it seems! You are ALL in my prayers and thoughts as always. I know it is very concerning to hear this sort of news. I was recently just told that my 6 year old also has to see a neurologist for perception problems, and we found out last summer she as nerve damage to her hearing and now has to wear 2 hearing aids. Although your news is a little more concerning than mine, I completely understand your feelings! I know you question what to do to help him, but to be honest I think just knowing he has a father (and mother) who love him so much, that they go literally to the ends of the earth for him, that they would move Heaven and Hell for him, that they will do everything in their power to take care of him in any way he needs to be taken care of is the GREATEST help to him at all. You and Lizze are the most wonderful and strongest parents I know. I know it's hard now, but think about all you guys have come through so far as a family! I love you all and am here if you guys ever need ANYTHING! I can be to Canton in an hour and a half 😉

Thank you so much. Everything is relative and when it\’s your baby you can\’t imagine it getting worse. Thank you for being such a good friend to Lizze. You guys need to get together. Thank you for all your support I truly appreciate it.

I agree a reunion is LONG overdue for us! I will always continue to support ALL of you in any way! It's my pleasure 🙂 Love you all

You could say that. But I think any father would.

Hi Rob
following your journey- I had asked a little bit about diet before, but with the the neurological bit- I had to ask , is he off gluten and casein? has that helped? I know quite a bit about food/diets and autism-And the neurological issues could be another symptom, among many. Is there food that he can't live without? dairy, chicken nuggets, juice, etc? something that he loves/craves or just consumes a lot of? have you already gone down this road?
all my thoughts and prayers,
stephanie

All of his doctors have said he doesn\’t have food sensitivities. At this point we are going to have to start reevaluating things.

We are running out of road and we\’re missing something. Time to look at everything again…

I will keep this in mind. Thank you

I know you probably already know this, but the gluten and casein issue isn't related to having a sensitivity. There is often a correlation, but not having a sensitivity to either on and IgG doesn't mean there isn't an issue still with those things. The problem with gluten and casein is that they leak through the gut into the blood stream as toxins. This sort of thing isn't detected by an IgG which looks at antibodies. If you didn't know this already, I would consider changing the diet just for a try. I don't think GFCF works for everyone on the spectrum, but it did for my little girl. She started talking 3 days after we quit these foods. She hardly even tried to even imitate us before that. 3 days later she said 13 words. This isn't the case for everyone and it definitely isn't a cure-all but if it can possibly help, I think its worth a try. It sounds like Gavin has some really serious, inexplicable medical conditions, so I don't know if you will see any results or if this could possibly be related, but I strongly believe GFCF is worth a try for every person on the spectrum after what I have seen it do for my girl.
My recent post The Rubberneckers

I have two kids on the spectrum the older one is 7 years . he has asperger syndrom . as your son , my son lost his reflex in his feet !!!!
undiscovered neurological condition or undiscovered metabolic disorder this is what they told me. after having more tests they found that he has orotic acid in this urin .. but no problem in the blood. I still don't know what that means. so WTF.

WTF indeed. You know, I think these kids have more then enough on their plate already. They don\’t need any more. Who makes the rules? We need to have a little talk.

Okay. So we have someone who was able to see something new. While it's making your head feel near implosion, this is GOOD. I know it just adds to everything, HOWEVER it also means that you ARE seeing the best Doctors! Other wise they wouldn't have noticed this. Not to mention, if it's something neurological and NOT CDD this could end up being a good thing. The loss of reflexes could be caused just by this neuro thing and NOT CDD. At least that is how I am going to look at it for you 😉

I\’m not sure there is a silver lining this time. CDD is not off the table and the reflex issues are a new symptom.

I\’m at a total loss on this one. I\’ll you be positive for both of us at least for today. 😉 As always, I appreciate your support.. It means alot…

This is what I was thinking. I couldn't really have put it any better.

You guys are in my thoughts and prayers. Good luck, Rob. Hang in there!

Thank you very much for your support

your family is in my thoughts and prayers
My recent post Detroit Lakes, MN Walk Now for Autism Speaks

it could be that you are dealing with a very rare or as yet undiscovered neurological condition. Meaning that you may be incompletely unchartered territory with Gavin. However remember this won't change much as Gavin has always been abit rare lol.

Hugs. You will do exactly what you have been doing, takeing it one day at a time and continuing to get as much help as you can. I will pray for your family.

{{{HUGS}}} I will continue to keep your family and your little boy in my prayers. I hope you have some concrete answers soon.
My recent post What Goes Into My Autism Blog?

Wow. You guys are in my thoughts and prayers.