How do you address major problems at school and ensure the best interest of your child with #Autism? -

8 amazing things that happened in my life today

How do you address major problems at school and ensure the best interest of your child with #Autism?

Lizze and I are really struggling with Gavin and how he’s doing in school.  We’ve kinda hit a crossroads at this point and we spoke with Dr. Pattie tonight, about how to address this.

There are two very conflicting sides to this problem.  The first side is what we see and experience at home.  The second side is what we are hearing from the school and being told by his teachers.

Basically, when we see Gavin’s homework, at least 99% of what he’s done is incorrect.  I should probably elaborate a bit.  We’re not just talking 99% incorrect.  We’re talking his answers aren’t even in the same universe as their correct counterparts.

It’s so bad that the only two things that even register as a possibility is that he has absolutely no idea what he’s doing or he simply isn’t reading the directions and doesn’t care.

Where things really get confusing for me as a rational, logical person, is that Gavin’s teachers all say he’s doing well. How is that possible? 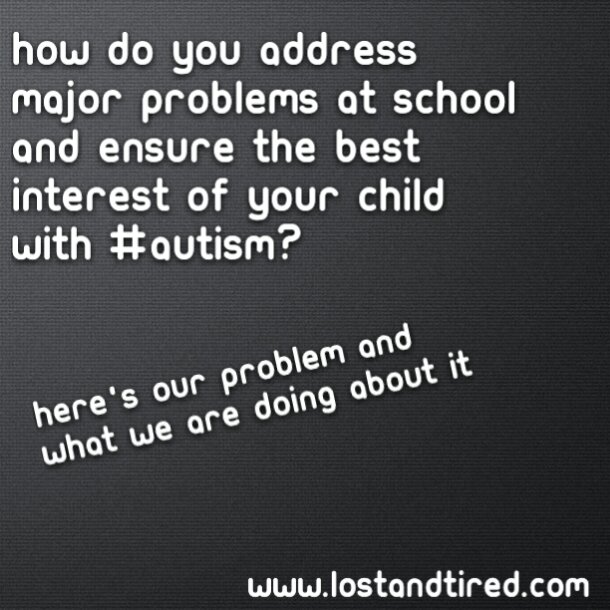 In my non-educator but highly educated opinion, I would think that what he does or doesn’t do on his homework would be a good indicator of where he is in the classroom.

There is very clearly a problem here and we need to figure out where it is.

In talking with Dr. Pattie, we’ve reached a consensus that one of three things is likely going on.

1) Gavin can do the work but just doesn’t want to. That’s what his teacher are saying as well and what I suspect to be a large portion of the problem. He refuses to read directions and basically wants someone to do the work for him.

2) He truly has no idea what he’s doing and the school, for whatever reason, has very, very low expectations for him and so he’s skating by with a decent grade. This is very possible because there are established cognitive and memory issues.

3) Some combination of 1 &  2 or maybe something else entirely.  Who the hell knows? Your guess is as good as mine.

This is really frustrating because nothing we are being told makes any sense, especially when that something is coming from Gavin.  His teachers are saying that Gavin tries really hard to get out of doing work that he’s otherwise very capable of doing.

That actually coincides with what we are seeing as well and to be honest, we have no reason to doubt his Math teachers. Unfortunately, the same can’t be said about Gavin and that leads me to what really puts this in the nearly impossible to figure out category.

Along with Autism and a whole host of mental health issues, he also has Reactive Attachment Disorder.  The long and short of it is that he lies, almost compulsively.  Time and time again, he has shown us that he can’t be trusted. Without rehashing all that RAD brings to the table (just read some of my recent posts for background), we never get a straight story from Gavin about anything.

There is a long history of him lying to us as well as trying to split or drive a wedge between us and the school. If he can split us, the chances of us catching him in the act of whatever he’s trying to do is reduced because we aren’t on the same page.

This is very common with RAD kids.

At this point, our concerns are that the standard they are holding Gavin to is entirely to low.  There also seems to be a lack of accountability as well. For example, Gavin seems to get 10/10 points for simply turning his homework in on time.  It’s like it doesn’t matter that none of his answers are even close to being correct.  If he turns it is late, he gets 5/10 and if he never turns it in, he gets 0/10.

His teachers assure us that he only has a C in math because he wasn’t turning in homework last quarter.  That said, we knew nothing about that.  Gavin was lying to us about not having homework and his teachers never said anything to us about it.

Gavin’s never had homework on a regular basis.

When we would ask him everyday, he would tell us that he either didn’t have any or he finished it at school.  Both being lies or untruths.

The game plan at this point is to try and salvage the rest of the year.
We are going to convene a meeting, likely after the holiday, with the key players at the school,  Dr. Pattie and ourselves.  We need to get everyone on the same page and since people are really hesitant to believe us when we tell them what Gavin is doing or is capable of, we need Dr. Pattie to explain from a position of authority. Basically, it’ll sound better coming from her.

Dr. Pattie has been treating Gavin for most of his life and next to Lizze and myself, she knows him better than anyone.

At this point, we’re hoping to be able to resolve this situation by working together. Gavin enters high school next year and at the moment, he’s set to transition to the special needs high school.  Having said that, all options are on the table.

If we can’t figure this out and regain some semblance of control over the direction Gavin is going in, we are looking into other schools for his high school education.

I truly hate the idea of that but we have to do what best for Gavin and his future.  That being said, we have a really good relationship with the school and I’m confident that this can be addressed and the school will work with us.  Some of his teachers may not like it but they don’t have to.

I hate to sound like that but some of his teachers are of the opinion that Gavin can do no wrong.  That’s something that’s very hard to overcome but we have to keep trying.

katydid91 you know, that’s an interesting idea.  We’ve always been trying to get to do things for the right reasons but in his case, with some of the mental health issues, that’s never going to happen.  I like your idea.  Thank you so much for sharing it.  🙂

Hi Rob!
I can totally relate. School was never an easy thing for me even though there were things I was good at. Math was the worst subject and I never moved past the watered-down special- ed version of pre-algebra.
Anyways have you tried giving Gavin an incentive? Not a bribe but an incentive? For example his goal would be to finish his math work with an 80% accuracy, 95% of the time in order to get something special, maybe a video game or a special dinner or something.
I found with myself, through my special needs high school that rewarding good behavior worked far better than focusing on the bad.