Alright, I’m really just kinda laying it all out there on this one.

About 12 years ago I started getting these little red bumps.
I believe they are called cherry hemangioma and are basically capillaries that penetrate the skin and form these little red harmless bumps. I first noticed them while in medic school about 12 years ago. My doctors have all said harmless and not to worry. I have noticed that lately I’m getting more and more of these things.  Many are just tiny little pinhead size dots.

I’ve been reading that these can be casued by many things but no one knows for sure. Three things concern me with these and honestly, I’m thinking about it all the time, which isn’t good. I know it’s cause I’m stressed out and trying to focus on something tangible but I just can’t seem to shake this fear. The three things that concern me about this is the “rapid” (probably a bad word to use) increase of these things, the fact that some say it can in very rare occassions be linked to cancer, some say iodine defincey and yet others say it’s caused by stress induced rapid aging. So I guess it’s actually 4 things. The cancer thing I seriously doubt and I think they are referring to a rapid explosion of petechiae and not this.

Iodine deficiency would actually make a lot of sense because we switched to sea salt about a year ago which contains no iodine. We used kosher salt as well thinking that would provide the iodine but turns out that doesn’t contain iodine either.

Then we have the BIGGEST concern and that is the stress factor. I first noticed these back in paramedic school, easily the most stressful time in my life up to that point. After medic school I spent the following decade continuing that stressful trend while fighting in court for Gavin and dealing with his decline into Autism and mental health instability. That brings us to today, where I’m more stressed out then ever before. The van is also not safe and a HUGE money pit.  I’m too busy with day to day or rather minute to minute things related to the boys that I can’t seem to stabilize our income in order to meet our expenses (which are much less then they used to be as we have simply given so much up). I can’t provide my family with a better place to live where the boys can play outside and Lizze doesn’t have to climb the stairs for nearly everything.  I also worry about her constantly and feel like I’m watching her slip away. I fear that I loosing her and I don’t know what I would do if that happened as she’s my best friend and soul mate. I want to help her so badly, as fruitless as my attempts would be, but it would take my attention away from the boys and they already don’t get enough from me. I don’t sleep well at night because of our mattress and my back, so I never get restful sleep. Not to mention that everything with Gavin simply piles that much more stress on top of everything. There’s never really an end to any of this and the only time I really feel good is while walking or running but I feel guilty for being gone the entire time. Even though I’m doing that for them.

I have also never spoken with anyone about the things I witnessed as a medic. I have seen things most could never imagine. The calls involving children haunt me the most. I can’t forget what it feels like to perform CPR on a child that I already knew was gone because i didn’t know what else to do and I not only wanted the parents to know that I did EVERYTHING possible but I needed to know that for myself as well. I also remember one case in particular where an older gentleman and his wife had been fighting right before we arrived to take him to the hospital. He declined so rapidly while in route to the hospital that no matter what I did I couldn’t save him. The last thing he said to me was ” please tell my wife that I love her and I’m sorry”.  I have NEVER been able to shake that and it effects my relationship with Lizze because I always have to resolve an issue instead of walking away. I don’t ever want to be in that situation where we part ways or go to sleep angry at each other in the even t something should happen. A huge part of the reason I quit being a paramedic was because I was burning out and these calls were getting tougher and tougher to cope with.

So stress is absolutely a problem and the only people in my life aside from Lizze that get this is Dr Patti and Dr. R, along with some of you. As it appears, stress management is almost nonexistent for me anymore. I have this overwhelming need to cry but I can’t. Maybe that sounds a bit weird but whatever. I don’t know if the stress is actually greater now or if I’m just so tired from the years of doing all of this that I can no longer cope effectively. Does that make sense?

Don’t her me wrong, I’m healthy aside from my cholesterol and BP being a bit to high (most likely stress related as well) and I’ve put in some weight but I’m working on that. The problem is that while I know these things aren’t really a huge deal, I can’t seem to get past it right now. I’ve dealt with things like this in the past when life gets so bad that I can no longer effectively cope. That’s about where I am right now. I’m hoping that getting back into walking and moving to running will help not only lower my cholesterol and BP but help to manage the never ending onslaught of stress.

The truth is that I think most if not all of these fears are related to the fact that I am SO worried about not being here for my family. I’m terrified that if something happens there won’t be anyone to care for them. I know Lizze would do a fine job but right now she can barely walk or stay awake and is in so much pain that it would make things almost impossible. I really just need to figure out a way to relax. As long as Lizze and I have been together we have never gone on vacation or have a weekend away to just recoup. There was always something preventing this from happening, whether it was court or money or just something with the boys.

I just told you things that I have never told anyone with the exception of Lizze. I feel a bit better after putting this all out there but I also feel kind of stupid at the same time. 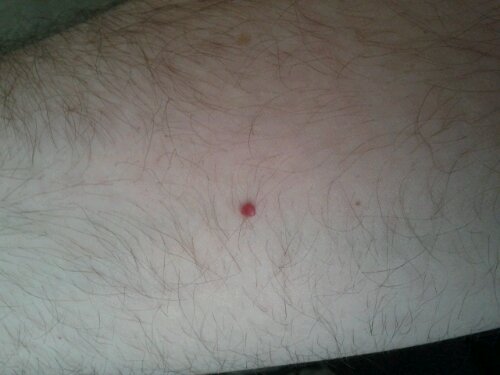 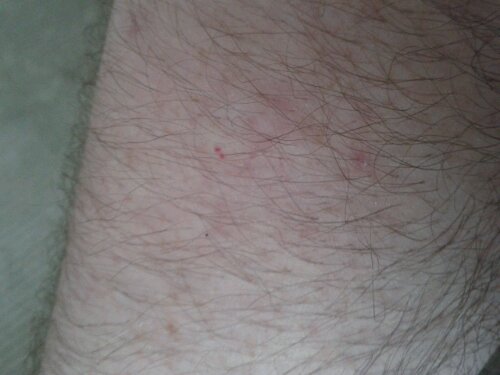 Thank you for sharing that. I do need to find a better way to manage my stress but I'm working on it. I had a few close calls while working as a medic. If you have never experienced on of those moments where your life literally flashes before your eyes, it's almost impossible to understand the change in perspective those situations will give you. Thank you my friend for sharing that and for your kind words.

I truly appreciate it 🙂

Thanks Jodi. How have you been doing.

I have them too. I never thought much about them…

I'm sorry you are so stressed about these spots on top of everything else. Hope the reg. salt helps. I've got them too; more and more all the time, but I know it's related to age for me (54).

They are very common and completely harmless. You\’re right are more common the older you get, not that you are old 🙂

That\’s why I concerned about stress related rapid aging. I need to find my happy place…… 🙂

Thanks for telling it like it is. Its so frustrating to read other blogs that always present such a rosy picture on life. Try switching your salt and using more of it, its easier than reducing stress lol it has worked alittle for me, it will help with the stress too if iodine is the issue.

Thank you. I did that last night when we put 2 and 2 together. 🙂