God grant me the patience…….


I have referred to Autism’s quirks on a number of occasions. So I thought that today, I would share one of Autism’s little quirks with you. For this post, I’m referring to Emmett.

I try to allow the kids in general to get as much hands on experience as possible. Sometimes it’s sorting laundry or feeding Maggie. Sometimes is repairing a toy or something else around the house.

Today, I had Emmett help make his dinner. He wanted chicken nuggets so I brought him the bag of nuggets and a plate. He very carefully and deliberately choose his nuggets and placed them in a very specific pattern.

He was very particular about this pattern and he did his best to make sure that nine of the nuggets touched. Emmett hates his food touching. Everything has to be separated or he won’t touch it.

I have nicknamed him Monk, after the the main character from my favorite show, Monk. Believe me, I do so affectionately. Emmett is a sweet little boy but he is very, very particular about things.

Just a little insight, that’s all. 🙂 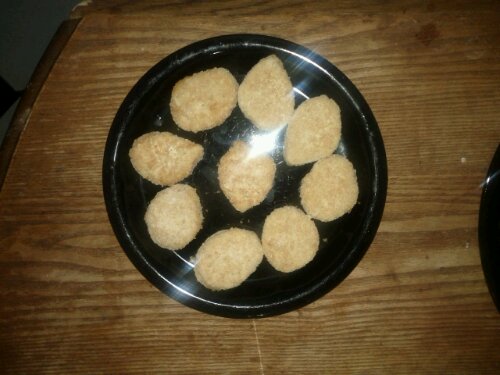 That's exactly how I place nuggets (or other foods) in the pan when I'm going to bake them…I think it looks pretty and it's most practical (not?); does this mean I've got a quirk or be on the spectrum?

My husband and I LOVE that show! and how funny that my daughter has her chicken nuggets always in a circle too!
My recent post Beauty's in the Hospital