“Wake up with a rash” Friday 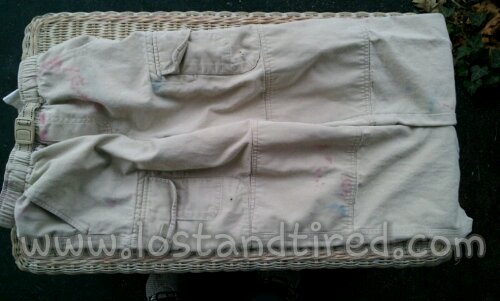 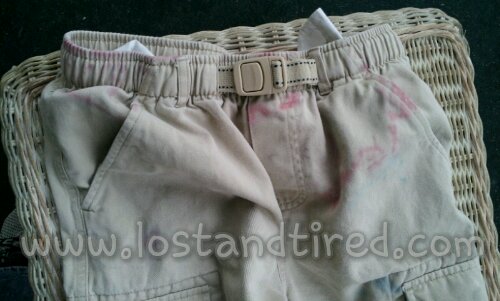 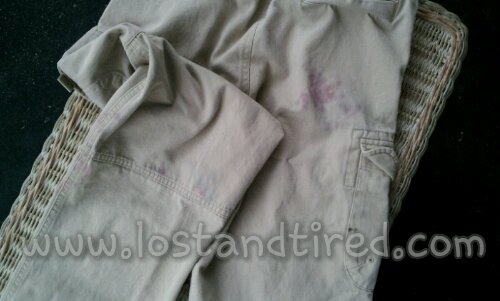 I swear to God,  that Gavin has to be the most destructive kid in the world when it comes to his clothes.  I mean,  honesty,  his clothes never stand a chance.

We are basically sentencing his clothes to death every time we buy them for him.

We were getting him dressed for his infusion this morning and handed him his brand new pair of school pants. However,  as we handed them off,  we noticed all of what you see in the picture.  He claims it’s from jello but unless he was rolling around in a kiddie pool,  filled with at least 2 different colors/flavors of jello, I don’t see how this was possible.

Gavin is the only person in our family that is ever missing clothes.  I have absolutely no idea what he does with them.

His socks are almost always full of holes.  We used to think he was snagging them on the hardwood floors.  That was until we witnessed him purposefully twisting holes in his socks.  Part of me wants to make him start buying his own clothes when they get destroyed in the fashion that he so skillfully manages to do.

I can’t seem to keep Gavin from destroying everything he wears.  Is there something wrong with holding him accountable for destroying his clothes? Should he be responsible for replacing his clothes when he does things like this?  I still want to know what the hell happened to those pants..

My son does this too i don’t hold him accountable i don’t think he can control his destructive ways. The Mdd. Told me he would do it all his life. Off meds he really goes all out on his clothes. I found a pair of jeans ript all the way up one leg. He has even ript holes at school. N can’t keep cotton in a coat. My sons grounded all the time if i had grounding him for that my child would never get his legos back n i can’t ground him to an empty room it leads to peeling paint etc. So grounding is punishment to do chores which don’t always last meltdown comes far after

I recognize those pants…they are the only kind my son will wear and they are EXPENSIVE. We get the stuff he will tolerate at thrifts store so we can afford…those pants! (It was easier when he refused to wear clothes!!)
My recent post Entry Fifty-Nine: Living Parallel Lives

Ironically, the price doesn\’t upset me as much as the principle and utter disregard for our effort to keep him in clothes. 🙂

That looks like something either bled on the clothes or he colored them w/ markers. Have you gotten any new clothes in red or blue that might have gotten washed with these? And I completely understand about kids destroying clothes. Somehow my Twin A (who is a size larger than his twin brother) manages to wear holes in the knees of all his pants so I can't hand them down to his twin as he outgrows them, too. : / He plays hard apparently.
My recent post Silver linings…

You know, I asked him about this last night and he says he doesn\’t remember. Nothing was in the wash because we found it as we were putting it into the wash…

My Emmett is the very same way. He almost never were clothes. He actually out grows things before even wearing them 🙂

I can relate to this one! I have one child who is so destructive to clothes, her next-younger sibling never sees hand-me-downs!

We are pretty much in the same boat. Frustrating, but such is life. Thanks

The Mendoza Science and Arts Autism Foundation inc on Facebook