Operation Hope: I spoke with the Cleveland Clinic this morning

We will be taking Elliott to see his pediatrician in the morning. We will be meeting about what medication to try with Elliott.

In case your new to my blog or simply forgot, Emmett is experiencing extreme levels of anxiety. 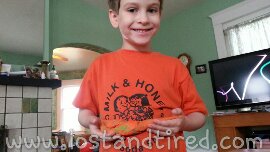 Anyway,  the plan of attack was originally to treat the signs and symptoms of ADHD.  The reason for that is that the medication is very fast acting and we’ll know right away if it’s going to work.

Having said that,  the problem is that his ADHD symptoms may simply be the result of anxiety.

I happen to be in the camp that believes we should focus on anxiety because we know for sure that it’s there. He’s not consistently hyper or unable to focus.  He’s doing great at school but struggling at home.

I’m not exactly thrilled at the idea of putting Elliott of meds but the quality of his life is being diminished by anxiety and if we can help him with that then we owe it to him.

He’s already in weekly therapy but it’s just not enough.

The medication would be used in conjunction with ongoing therapy or counseling for a synergistic affect.

I’m praying that we walk out of the appointment with a script that will help to provide him with relief. With the news that his big brother will be leaving, he’s on the edge.

We had to have this discussion with Amanda's doctor in May.  He presented as either starting ADHD medication or Anxiety.  He was leaning towards ADHD to help with school.  I said that I did not care if she flunked 1st grade but that I wanted a little girl who at just before turning 7 was not TERRIFIED to go to sleep.  He went with my recommendation and it was incredible.

Removing some of the anxiety from Amanda's day-to-day life has improved behaviors and her learning at school.  We have had to increase once so far as she started at 1ml.  She is only 43 pounds.  By this time last year, I was attending my 3rd IEP meeting of the school year and so far, she has done incredible in 2nd grade.

Chosing to medicate our children is never an easy decision but I am so happy that we have helped Amanda with her anxiety.

@JudyeNazareth that's awesome. Medication can be a wonderful tool to improve a child's life, when used responsibly. Kudos to you and best wishes that your daughter continues to improve. 🙂

Such a handsome young man! Good luck with the appointment ~