My sanity is driving a fast car off a short bridge

How do you know you’ve lost your mind?

Emmett was eating some jumbo shrimp for lunch this afternoon when he decided that he couldn’t deal with the tails.

Now, up to that point, he was eating around the them as is commonly done by most people when they eat shrimp.

Today however, he wasn’t willing to do that.

He first wanted to cut the tail off with a pair of scissors, but we said no.

We explained to him that he just needs to hold it by the tail and use his teeth like scissors and bite off and chew up the part of the shrimp that he’s supposed to eat, just like he normally would.

Apparently, today the tail was disgusting and he wouldn’t even touch it.

However, he didn’t let that stop him.  In true Lost and Tired family fashion, he thought outside the box and came up with a solution that far less disgusting [insert sarcasm here] than actually touching the tail himself.

What did he do?

He flipped the shrimp around and holding it by its body, allowed Maggie, our English Staffy, to bite off the tail for him.  He then proceeded to eat it.

Not wanting to attack his creativity and problem solving skills, I had to speak with him about this.

I asked him why he did that. He replied,  “Daddy, the tail is disgusting and I don’t want to touch it”. After explaining to me his reasons, he ran off to play.

I mean, obviously it’s far less disgusting to allow Maggie to bite the tail off for him,  than touch it himself. After all,  she’s only using the same mouth that she licks her own butt with and sometimes Bella’s gross parts as well.

Emmett John,  get back here, why don‘t we go brush your teeth again, you know, just for fun. 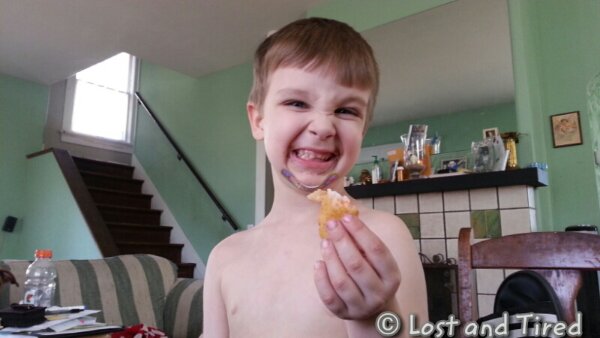 I always yank the tail off by pinching it and pulling it off. That's how i was taught. But hey, go emmett for trying to be creative. 😀 Gotta love it.

@Silachan and so does Maggie