Ringing in the New Year at high speed

My final confession of 2012

I’m giving up the fight….sort of

Sometimes there comes a point when you realize that you can fight no longer.  For me, that time has come.  I’m exhausted and I’ve spent all I had to the point of completely being depleted.

I have far to many battles waging right now and I don’t have enough left was wage war on multiple fronts.

The time has come for me to strategically surrender.

I’m in a place that I have little choice but to reprioritize.  Lizze needs to be in the Chronic Pain Rehabilitation Program.  However, this is far easier said than done. The logistics aren’t damn near impossible. 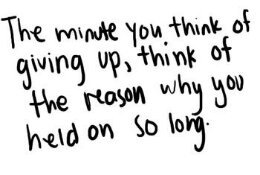 She will likely have to stay in Cleveland, either with a host family or in a hotel. We would bring her home on the weekends.

We are looking at around $1,000 for room and board alone and that’s the absolute cheapest scenario. That doesn’t include the program itself or transportation to and from.  We still don’t even know if insurance will cover the $30,000 cost of the 3 week program.

Lizze was originally going to hold off because of her aunts health. Her aunt is nearing the end of a long, bravely fought battle with cancer and Lizze wanted to be there for her.

However, the doctor at the Cleveland Clinic said that Lizze could start the program whenever but that as it stands, she’s losing her life and needs to get help ASAP.  I had never heard it put that way before and it was an eye opener for me.

Whether he was speaking figuratively or literally, the fact is that Lizze’s body is falling apart at the seams.

She’s not sleeping or eating without getting sick.  She’s is in so much pain that there isn’t even a scale to measure it. The stress she is under is destroying her from the inside out.

The latest in her health journey was the discovery of Macular Holes in her right eye.  She sees grey floating spots when viewing things through her right eye.  We always thought they were related to her migraines but they aren’t.  She doesn’t just have one hole but several. What this means exactly, we don’t know.  There’s a good chance that she will need eye surgery and recovery requires weeks of remaing in the face down position.

There is one specialist at the Cleveland Clinic that works with Macular Holes and we see him next week.

The bottom line is that Lizze’s needs to be the priority right now.

Having said that, we still have everything going on with Gavin as well.  His health is a crap shoot and steadily declining no one knows what to do.  He still needs residential placement and who the hell knows if and when that will ever happen.

Right now, I’m fighting to keep up with the bills and make sure that everyone gets what everyone needs.  That’s my job.  I’m a father and a husband, it goes with the territory.

The problem is I only have so much functional me left.  I guess I was really out of it today and actually had Lizze pretty worried.

I’m trying to keep a grip on everything but I can’t do that anymore.

We are over two months behind on our mortgage, currently in default and there is absolutely no help available.  It’s my aunt and uncle house and we are basically making the payment through a land contract.  Not paying the mortgage doesn’t really impact us directly at this point but it impacts them and it’s killing me to know that I’m messing up someone else’s life.

You know, it’s like the $1,000 for Lizze’s room and board would basically get us caught up on our mortgage, for the most part.

Having said that, how can I take that away from Lizze and the medical care she absolutely needs? I’ve been fighting this battle to make everything happen.  The problem is that I’m spread so thin that I end up dropping the ball and making things worse.

I feel like I’m being torn into pieces right now and if I don’t let go of some of these struggles, there won’t be any of me left to continue the fight, even on a smaller scale.

Does any of this make sense?

Let me say also that I’m not sharing this with you to garner sympathy or anything like that.  I’m sharing this because as a special needs family, these are the kinds of quandaries we often find ourselves in.  I imagine that we aren’t the only one out there having to make the difficult decisions. This is meant to bring awareness to some of the types of struggles families like mine have to face.

God, I can’t even imagine what it would feel like to be able to let go of at least some of this struggle.  I could focus on the things that need to be focused on and then be able to move forward with a bit more strength.

It’s like playing a racing game.  If you are constantly pushing the button for the speed boost, you’ll run out when you need it most.  However, if you take better care in how you use you’re limited resources, even if a few cars pass you by, you can use it when it really matters.  Maybe you don’t win the race but at least you will finish it.

Does this make sense to anyone?  Probably not…
I’ve never backed down from anything in my life.  Well, I backed out of going into the Navy at the last minute but that was different.

I don’t know how to put things down. I suppose that’s something I’m going to have to learn and learn quickly.