It’s going to be one of those sleepy days

I’m proud of myself because……..


A day can make so much difference.

I received a call from Gavin’s immunologist, Dr.  Wasserbauer.  She was returning my call from yesterday.  She likes to personally return phone calls to parents, which is awesome in my book.

She wanted to make sure that I understood what was going on and let me know about the alpha-fetoprotein test, I was inquiring about.

The AFP test was the first thing she had done back in 2011 (I think she said 2011). She knew that was the first step to take.  His levels came back normal and that’s why insurance wouldn’t pay for the genetic testing.

You may remember from my previous ramblings yesterday,  the John’s Hopkins said that a negative AFP test pretty much excludes a diagnosis of A-T.  Dr.  Wasserbauer already knew that and so that’s why she said he doesn’t have A-T (Ataxia-telangiectasia).

This is where I was confused.

She doesn’t think he has A-T, she thinks he has Ataxia-Telangiectasia like disorder or ATLD for short.

Here’s a snippet from Wikipedia on ATLD.  It’s buried in the page so I snippet it and shared it here, with a link back to the original source.  This is reliable because it was actually written by John’s Hopkins. 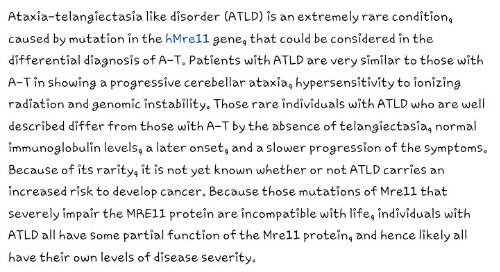 Some of the big differences between A-T and ATLD is that ATLD affects a different gene and mutation.  Also, telangiectasia are not present, symptoms show up later in life, the disorder progresses more slowly and immunological issues are not present.

It also should be said that apparently, ATLD is even more rare than A-T.

Now that we’re all on the same page again, this makes much more sense and I better understand where Dr. Wasserbauer was coming from.

What happened was simply that I misunderstood what she had been saying and because of everything else that has come up with Gavin lately, this has been a back burner issue.

At this point, I have no idea what’s going on.  There is certain criteria that must be met for Gavin to go to the A-T Clinic at John’s Hopkins and because we know going into it that it’s not A-T, the may prevent us from proceeding with them.

There is almost nothing known about ATLD, while this could be considered good news that it’s not A-T, we are in a position where we may not have anywhere to go.

Lizze and I have the utmost confidence in our team of doctors at Cleveland and Akron, so we’re good there.

I don’t know what if anything this changes.  The prognosis seems to be the same, it’s just a slower, more drawn out process.

The other thing is that his immunodeficiency may be completely unrelated and a separate, independent condition all together.

The water is once again far too muddy to see the bottom and now, there is a whole helluva lot more of the unknown factor.