OMG…… It took me two hours to get Emmett to sleep


In but  a few hours, we will be making the trip to the  Akron Children’s Hospital Heart Center.  We will be meeting with Dr. Clark, one of the top pediatric cardiologists in the country.

The subject today will be Gavin’s ongoing heart rate issues.

Going into this, I am aware that this will be an unusual appointment because while Gavin has heart problems, they aren’t actually heart related, per say.

Let me get you up to speed so the above statement makes more sense.

One year ago this month, something began happening to Gavin that was later identified as the extremely rare form of autonomic disorder that has all but taken over his young life.

Our first run in with this was last May (2012),when Gavin was hospitalized for 4 days (if I recall correctly) due to some unknown conditions.  This condition basically rendered him unconscious for a few days and caused his heart rate to soar into the 150-170 range.

His entire system was out of whack and his doctor at the time was talking about moving him to the PICU.

However, as quickly as this mysterious condition hit, it was gone and Gavin began doing much better. 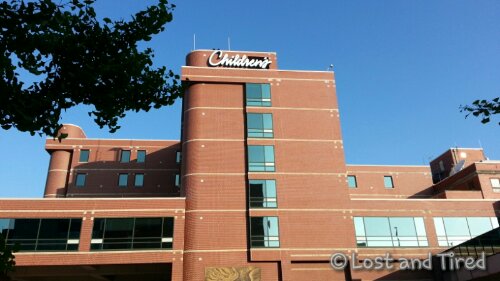 This was the very first of many, autonomic crises that he would face in the over the next year.  In that time, he was hospitalized many times for similar but in some cases, less severe symptoms and his autonomic care was transferred to the Cleveland Clinic.

We learned that Gavin is physiologically incapable of sweating and that he indeed has marked autonomic dysfunction.  Basically, his brain doesn’t control things like heart rate, blood pressure, body temperature and other involuntary functions correctly.

This leads to Gavin’s health being extremely fragile as just about anything can trigger the next life threatening crisis.

In fact, Gavin is the only child to ever be seen at the Cleveland Clinic with this disorder and our specialist has only ever seen 2 other cases in his career, both outside the United States.

Complex and unknown is the only accurate ways to describe what we are up against.

Now that we have thing in context, let me continue to explain what’s going on today at the cardiologist.

Since the first crisis last May, Gavin’s resting heart rate has been in the 130’s almost constantly. When it does drop down to normal (say 80/bpm) he typically experiences a crisis.

If he does just about anything that requires him to move around much, his heart rate skyrockets and he becomes unstable.

Even with the multiple cardiovascular medications he’s on, nothings lowering his heart rate.  The concern right now is ware and tear, what constitutes a danger and how can we intervene.  Basically, we have no idea what to do and right now, all we have been able to do is severely limit his activity.  His autonomic specialist has stressed just how serious and life threatening this is and that we have to be very diligent.

Basically, whenever a crisis hits, we don’t know if it will ever end.

The reason I said this will be an unusual appointment is because while Gavin’s heart isn’t functioning the way it should, his heart isn’t the problem, it’s his brain.

I belive that most often times, when someone has rhythm or rate issues, it because something within the heart isn’t working correctly.  The cardiologist can identify this problem and address it.

However, in Gavin’s case, everything is different and we don’t know how to address it.

Hopefully, Dr. Clark will be able to give us some guidance and possibly even provide Gavin with relief.

I’m nervous about this 4th trip to Akron Children’s Hospital because we already know that we can’t fix the problems within his brain.  I feel like we have very few options as Gavin’s autonomic dysfunction continues to worsen. I’m worried that his heart will be collateral damage.