My feelings on Equal Marriage Rights -

My feelings on Equal Marriage Rights

You may have noticed the recent addition of a Red Equal sign in my banner.  This is something that I’ve been meaning to do for awhile but haven’t had a chance to put together.

That’s going to change. In a bid to help you all learn a bit more about me, I’m going to begin sharing more of my personal beliefs on issues that are considered hot topics.

While these topics don’t always relate to Autism or special needs parenting, they do help you get a better idea of who I am at my core. While this may turn some of you away because of conflicting beliefs, I’m hoping that if we have differences of opinion, we can respect each other and continue on with our mission of making the world more Autism Aware.

The addition of the Red Equal Sign is to signify my support for the equal rights of all people to marry.

Lizze and I have family and friends within the gay community and we both love and support them, wholeheartedly.

Being Catholic, I know what the church tells us but quite frankly, I don’t agree.  There’s actually quite a bit that I don’t agree with.  Does that make me a bad Catholic? Maybe…..

However, I believe in a God that’s accepting of all his children, just as I would be if any of my kids came to me a some point and told me they were gay. It would change nothing.  They are my children and I love them unconditionally. 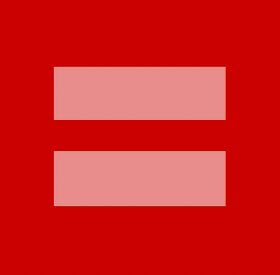 I believe God to be the same way.

I think that the problem comes into play when human beings pretend to speak for God or try to interpret parables, written in ancient text, meant for the people of that time. Combine that with the human propensity to fear those who are different and you have what we have today. Bigotry.

Look, to be completely honest, while the gay lifestyle isn’t my cup of tea, that doesn’t mean that I don’t respect them.

I’ve learned over the years that Love is Love, no matter what the wrapping looks like on the outside.

When I was 18 years old, I worked at a very popular restaurant.  One of my managers was gay and that was the first time that I had ever met a member of the gay community.  Over time, I realized that what I had been taught by the church and societal stereotypes, was incorrect.

The turning point for me was when my managers partner was diagnosed with prostate cancer.  I watched him go through the pain, fear and anguish that I would go through if someone I loved was fighting for their life.

My eyes and heart were opened by what I learned.

Look, the truth is, you don’t have to like or understand how two people of the same sex can be attracted to each other.

However, that doesn’t mean that the love and devotion they have for each other is any less valid or real than what you feel towards the person your in a relationship with.

I’ve come to understand and believe that it’s not right to discriminate against people in relationships that are different than mine.  I know that there will be people that do not agree with me but you know what, that’s their right and I respect that.

As for me, I want to state publicly that I hope someday to live in a world that’s accepting of relationships, regardless of the gender combination.

However, you and I have a choice to make.

Do we accept and embrace these people for who they are and who they love or do we treat them differently, as though they are subhuman?

My choice is to embrace, respect and recognize the right for two people, regardless of gender, to meet, fall in love, get married and raise a family.  I believe that this should be a fundamental human right and one that I fully support.

My wife and I teach our kids to be accepting of others, regardless of what makes us different.

Kids Learn by their parents example and the example that we choose to provide for our children is one of acceptance and love.

What will you do?

Rob, you worded this so well & I agree with you 100%! It is exactly how I feel regarding marriage equality and treating everyone as they are human, no matter their gender, sexuality, color of their skin, etc…
Thank you for sharing this with us.

Very sad story… And exactly why equality is so important.

The honor is mine and I’m so, so sorry for your loss.

We lost our Beautiful son almost 4 yrs ago. We live in a very old southern Baptist area with family members of my husband. My son would be 26 on his next Birthday, he knew he should have been a girl. In church he later believed he would go to hell because he was not interested in Girls. He tried to over come his feelings. I wish I would have been stronger and more knowledgeable back then, he would have been a lot Happier. He knew we supported him. But the narrow minds in our area scared him so he left to Texas so he would not be found out here. He was a wonderful loving, kind person. Ready to help if needed. If I had this to do over again I would have helped him to be a Girl, on the outside too, God makes us all different, obviously , through your post I feel I have Honored his memory. Thank you, Donna

you said it all right there Rob…. “Love is Love”… I guess the people that have a problem with this would also have a problem with their daughter/son falling in love with someone with a special need…. wow… really… as a parent I could care less who my girl loves as long as he/she/martian/dog/cat loves her BACK!!!

People confuse the opposing side very easy.
Pro-marriage equality is not “anti-traditional marriage”
And pro-choice is not “pro-abortion”.

The other point I’m hoping people take away from this is that you don’t have to understand or agree with someones lifestyle. However, that shouldn’t mean that people can’t live the life that makes them happy. No one is being hurt and if a gay couple marries, it doesn’t make my marriage to my wife somehow invalidated. Love is Love. 🙂

I agree. I feel like, by sharing this, I’m able to publicly support something I believe in and set a good example for my kids. Perhaps it will make people think. If I lose readers, so be it.

I posted a picture like this with puzzle pieces as the pink lines… On my kids page (autistic adventures of TnT) and a couple blew a fit. Why people think everyone has to agree with everything they do, or they are automatically wrong or some how “going to hell” is beyond me.
Good post 🙂

I really like this post and I’m glad you decided to share it. I think it is horrible how some people view members of the gay community. Stereotypes are abounding and oftentimes it gives people the wrong impression of reality. In essence, being gay becomes a master status in society in which members of the gay community are seen as only gay people and little to nothing else. The truth of the matter is regardless of their sexuality, they are still people, not much different than us. They are more than just gay. They are teachers, doctors, our troops, nurses, mothers, fathers, sisters, brothers, and so much more.

Very well said, Rob!
I’m not gay, but when I was 17 I had an episode in my life that kind of enlightened me about the problems facing gay couples and if one of them is hospitalized. They said I was going to have to have surgery on my mouth, after which I would not be able to talk for awhile. I had a boyfriend — the same one I have now. My family did not like my boyfriend. I went through a period where I was freaking out worrying that he wouldn’t be able to visit me in the hospital, because my family wouldn’t let him, and I would be unable to talk and was a minor in any case. I desperately wanted my boyfriend to be there to support me. And then I got this epiphany: “Think of those poor gay couples where one’s in the hospital, maybe dying, and what if his family won’t let his boyfriend see him? The boyfriend has no rights even if they’ve been together forever. That’s really terrible. That should NOT happen.”
(Things in my case turned out to be much simpler. I talked to my parents and told them I wanted to be able to see my boyfriend in the hospital. They agreed. Then my surgery got canceled anyway.)

MeaghanGood well put.  When you remove the wrapper, the feelings are the same and love should be celebrated.  You shouldn’t have to play a certain gender role or be with the opposite gender to have your feeling recognized and taken seriously.