A morning filled with Sensory Overload and Meltdowns

A morning filled with Sensory Overload and Meltdowns


Our morning has only been here a short while and already it’s filled with screaming and meltdowns. It’s like Emmett started his day overstimulated.

Two things set him off this morning.  The first thing was his pet ball. This is a light up bounce ball on an elastic string that straps to his wrist.

He drags this thing behind him and it gets caught on things or tangled up.  It got both caught up and tangled this morning and he just lost it.

After we got through that crisis, he was definitely primed and ready to explode.

Lizze and I tried for 20 minutes to help him through it.

When this meltdown passed, he wanted dry Ramon Noodles for breakfast. We decided not to pick that battle and I think that it was a wise decision.

I believe he gets a sensory fix off of the dry crunchy noodles and it helped to ground him.  It certainly helped this morning, there’s no question about that.

Right now he’s crunching on his breakfast and playing Pokemon with his brothers.  Hopefully, his day has changed course and he’s headed to a better destination. At this point, the outlook is promising but we won’t know until we get there.

When your kids have a meltdown, is there a calming technique that you have found that works well? 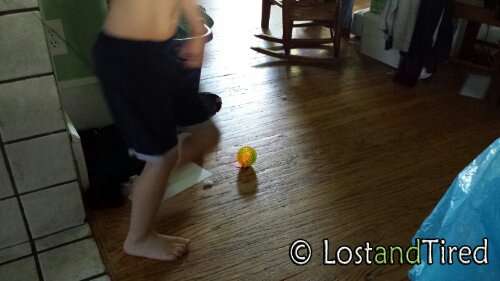 My son seems to wake up the same exact way. He wakes up in a good mood but then it’s like the thought of getting out of bed and going downstairs to breakfast is overwhelming and he easily becomes overstimulated. He has been going to his OT for almost 2 years now and mornings are still an issue. Not every morning, but most mornings. This morning I found your website and it was a big help. His therapist always suggested things totally opposite of crunchy items in the morning but I thought if it worked for your son maybe it would work for mine. To my relief he is calming down and is now getting his hands on another sensory activity. The tricky thing though is trying to figure out what sensory input he needing in the morning to regulate his body. Do you find that your son will want something extremely crunchy one morning and then seek another texture the next? Thanks so much!!

first- then, first-then.  I don’t even try to speak in sentences to my 6 yr old when he gets hysterical, I just keep going after- for instance- first fix shorts, then crunchy food.  knowing that the “good stuff” is coming soon helps.  and the simple language allows him to actually hear what I’m saying.  he has excellent language and sometimes we take it for granted- when he’s melting down his comprehension is minimal