Prayers are needed for my wife


This is by far the worst Monday in a long line of bad Monday’s. Lizze didn’t fall asleep until 4 am this morning and so it was a restless night for me as well.  I’m tired going into the day and to start things off like we did……. To be honest, I’m feeling so demoralized and defeated.

Let me back up a little bit and share what happened.

This is spirit week at school and the boys are allowed to dress up as something they want to be when they grow up.  Elliott wanted to be a martial artist and Gavin just wanted to wear his uniform.

Emmett wants to be a doctor,  so I dug out some of my old medic gear for him to take. 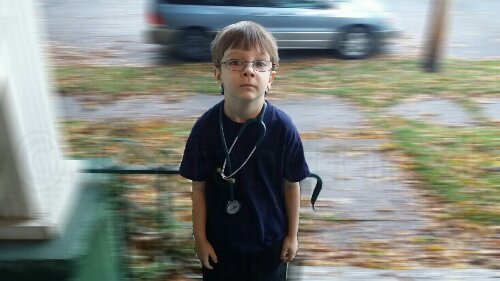 Everything was going so well until after I took this picture of Emmett.  I shot this while we were standing on the porch waiting for the dogs to go potty.

After taking this, I realized how chilly it was outside and told Emmett needed to wear a coat or sweatshirt.

That was all it took and he went from medical doctor to massive meltdown.  At one point, I thought I had solved the problem by locating a hoodie that was super comfy and he could wear all day.

It was a work around for the underlying problem.  That problem is that he struggles with hanging his coat at school.  The idea of doing that is so overwhelming for him that he would rather be cold than have to deal with that.

His teachers are really supportive but he just can’t deal with it.

Emmett seemed to like the idea of a the hoodie until he realized that it had a giant front pocket.  He was freaking out because his hands would touch when he put them in the pocket.  I explained that hoodies are like that and that he could keep his stethoscope in there.

It got really bad and we had to literally carry him out to the van, kicking and screaming.

When we arrived at the school, Lizze walked him in to help him hang his coat up.  The school is going to put a hook up in the office, which is across the hall from Emmett’s classroom..  He will be permitted to hang his coat up on the hook in the office because that’s something that he can do..

I’m not sure why he’s so upset because his teachers are more than willing to help him?

I guess when Lizze left he was doing okay.

This has totally thrown my day off kilter.  I hate pushing my kids through things like this because they get so upset.  In truth, there are times when we don’t pick the battle and just try and comfort him.

I can’t begin to explain what it feels like to drag your child with Autism to school ID meltdown.  It’s absolutely horrible and I hate doing it.  🙁 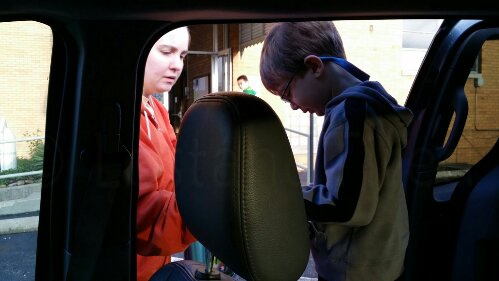 Lost_and_Tired this sounds like every day for me. Countless meltdowns, kicking & screaming to school 🙁

megskitchen Well said Meg. That’s a really good way of looking at it. 🙂

I am so sorry, we had one of those days last week so its fresh on my mind.  I have to admit though, there is a tiny bit of relief when you successfully get them through it and off to school (and know that someone else competent can handle it for a few hours)