We came under fire tonight


Gavin’s been having some problems in Math class.  I’ve spoken about this a few times and expressed my concern.

Tonight I got a very interesting email from Gavin’s Math teacher.

I love being able to email back and forth with the boys teachers.  This is a perfect example of why this is so beneficial.

After having read what had happened on Friday, the resulting loss of points or tickets makes a great deal more sense. I’ve said this a million times but I’ll say it again… Open communication with your child’s school is so important.

Gavin was working on a Math assessment and did really well until he got to the last three problems.  For some reason, he became frustrated and instead of asking for help, he became disruptive.  The teachers told Gavin to go get a drink and settle down.

He came back into the room and went right back to work on the last three problems, ignoring his teachers instructions and what he was being told to do.  That cost him a point. 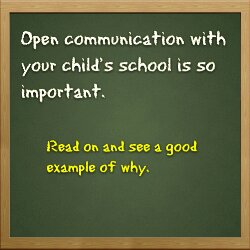 Gavin got upset over the Math problems again and would not listen to his teachers who were trying to help him.  It got to the point that his teacher told him to simply turn in the paper and the three questions wouldn’t be counted against him.

Gavin refused to turn in his paper and after a few more attempts to reel Gavin in, he lost another point for refusing to listen and do as he was told.

This sounds very much like the Gavin we know.

In his mind, it was more important to physically complete the assessment, than it was to listen to his teachers instructions.

Historically, Gavin has never handled this type of situation well.  He hates to lose, get a question wrong or make a mistake.  While we haven’t seen this from him in some time, this is exactly what he does.  Lizze and I are going to have to speak with him in the morning before school.

He needs to know that this is unacceptable behavior.

Unfortunately, I know exactly what’s going to happen when we tell him this.  It’ll go in one ear and out the other.  He won’t learn anything from this and the problems will likely continue.

We are going to have to figure out an approach that will have a better chance of succeeding.

Lost and Tired  SteveBorgman AutismAdventure I’ve worked with kids who, when undiagnosed, went through HE (double hocketsticks), until the school finally figured out that maybe a more specialized approach like what your son has would help.  But I guess they have to jump through all their administrative hoops before they do what they know needs to be done.

Lost and Tired  SteveBorgman AutismAdventure Has being in this type of classroom been helpful for him?  I imagine it has.

My son is the same

I could see my son doing this, too. He gets so upset when he doesn’t get things perfectly, or loses. Fun parenting times!

Lost and Tired  rosie d He is at our local community elementary school, mainstreamed in 5th grade.

rosie d what kind of school does your son go to? I’ll definitely share if I figure anything out.

SteveBorgman AutismAdventure Well said Steve.  Gavin’s in a small classroom with only ASD kids.  Quandary is absolutely the right word.  🙂

IF you figure this out, make sure you share!  This could describe my son perfectly!  He hates not getting something right, and can come unglued if he doesn’t know the answer when it comes to a test.  and the support I was getting from school, I feel has disappeared.  Not sure if it is real, or just perceived, and who is the most realistic on what needs to happen.  At his last conference, they said they want him to work on not getting so frustrated he empties his desk, and that he listens to the teacher when asked to do something.  He is 11.  I hear them saying he needs to be in control of his emotions at all times and lose the fixations he has.   If he could do this, wouldn’t need that IEP he has, lol!

AutismAdventure Great point.  Rob and you both are pointing out some interesting quandaries for both the parents, teachers, and child.  Perhaps it can help to teach Gavin some information on how his behavior affects others, but it’s equally important that others understand what Gavin is going through when he gets fixated.  No easy answers.   Here’s an article about social behavior mapping that might help: http://www.myaspergers.net/social-behavior-mapping/.  And Michelle Garcia Winner’s comic SuperFlex might help Gavin with developing some mental flexibility.

It is really difficult for our kids to get out of their fixation.  Sometimes consequences mean nothing in the moment.  Believe me when I say that our son’s biggest reward and punishment (minecraft) is such a deterrent that if he does not at least try to comply when it is brought up that he is not able to comply.  Some kids do better with rewards than punishment though, I believe in using both anyway.  Maybe it would help to have a way to earn points specifically targeted at his ability to bring himself out of that place where he is so fixated on something that he is disruptive.    I don’t know that my son can keep himself from going to that place but, if he works really hard he can sometimes get out of it.  So, I try to reward him for doing that.

It is just me and it is your kid, but I still don't believe in taking points or tickets away. It still wasnt gavin's "fault". his behavior is not always going to be spot on. You said yourself you are going to talk to him and it won't help, neither will taking those tickets. I shouldnt be saying anything because this is not my business, but yall do such a great job. several of us eventually "got" what gavin (who really is a handsome kid!!) was saying in the video but it took a while and the teacher didn't have a while because she has other students to teach. if he is getting tickets taken everyday then have someone in the room with him to help out till this gets worked out. if it is a one or two time thing let it go at this point. good luck have a great day