Confessions of a overwhelmed and frustrated special needs father


We met with Dr. Pattie tonight and made arrangements for the E’s so that they weren’t present for this appointment.  We needed to talk to Gavin and figure out what the heck is going on.

The topic was of course about Gavin seemingly compulsive lying.

If you missed my previous post and are wondering what the heck I’m talking about, please read Lies, Lies and More Lies… When will it end?

We went through the whole situation from today with Dr.  Pattie and he lied to her as well.  We’re talking very obvious things he’s lying about.  There’s absolutely no question that he’s not telling the truth.
We also fave Dr. Pattie the results from last year’s intelligence testing, so we could decide where to go with more or different tests for his basic intelligence.  We need to establish a baseline, in order to track any cognitive regression.

It’s also important because it gives us insight into his intellectual capacity.

We don’t want to expect more of him than he’s actually capable of.  Does that make sense?

Here’s the basic summary from last year’s testing. The results are too terribly bad.  He is having issues with his memory, which is not unexpected. 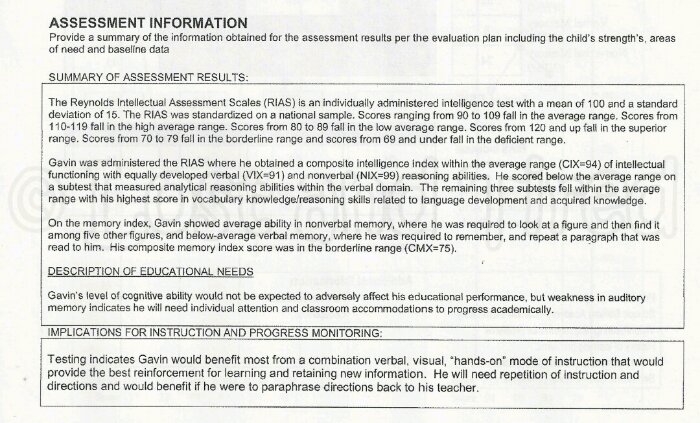 It talks about needing repetition of instructions etc.  That said, his cognitive ability shouldn’t adversely affect his education.

There are clearly times that Gavin forgets.  There’s no question about that.  However, Gavin has a nasty habit of commonly forgetting anything that end to him being held accountable for his actions.

As an example.  Taking from my earlier post, linked above, this is what Gavin could remember of Wednesday morning.

He remembers what he had for breakfast, what teachers had cafeteria duty, what his brothers ate, whether or not he was wearing his cost during breakfast, what table they sat at and that he ate with his brother.  However, he forgot that his teacher came down to the cafeteria and sat down with him for awhile and went over his homework, step by step.

I just don’t buy it.

Anyway, during our appointment last night, I was really getting frustrated and even angry because he put on this elaborate emotional display about how he just can stop lying.  He fake cried and when I couldn’t take it anymore, I told him he was excused and could go play.

The moment I said that, all the drama stopped and he went to the other side of the room to play with the trains.

We are all really stressed out and frustrated because this was a painfully difficult conversation to have with him because he clearly didn’t care and getting any thing out of him that was even close to the truth was impossible.

Gavin, as I said, got up and went to play with the trains.  He sat down and played with them while humming a song as though nothing had just happened.

I look over at Lizze and I could see how this was affecting her and I just sorta snapped.

I stood up and told Gavin that I’m gonna teach him a new word. That word is bullshit.  He asked what that meant and I explained that everything that had just come out of his mouth was bullshit. It means that everything he had just said and done while we were there was utter nonsense and dishonesty.

This wasn’t one of my finer moments and I never curse in front of my kids but sweet Jesus, I just couldn’t take it anymore.

Dr. Pattie explained that I was wasting my time because a) he’s never gonna get it, and b) he simply doesn’t care. We are never, ever going to get a straight answer out of him and I just have to accept that.

To be honest, that so much easier said than done because I’m a very involved and and hands on parent.  I feel like I’m letting him down by washing my hands of this.

Having said that, there is absolutely no chance that anything I can say or do is going to change anything.  It’s all wasted energy.

When you step back and look at the big picture, it’s quite scary because he’s lying about everything.  Even if he does tell the truth, we have no way of knowing the difference.  We have to assume the worst, in order to ensure everyone’s safety.

We have to supervise any band all contact with his brothers as well as anyone else for that matter.

Gavin’s a teenager now and I don’t know how to live with someone that I can’t trust.  Typically, if I can’t trust someone, the get removed from my life.  How can I do that to my son?

I’m so distraught over this whole thing and I keep hoping that I can get through to him and get him back on the right path.

sarahsparks79 thanks for you well thought out advice.  We are open to anything that may help.  Thank you so much. 🙂

Perhaps send a note to his teacher letting her know that homework has become a huge battle and that you have decided to let Gavin learn his lesson about not doing homework. (I don’t know if that will change his attitude, but it is a temporary burden that you don’t have to deal with). Maybe the teacher can help set up a rewards system for turning in homework. It’s never to late for incentive systems for middle school or high school students. It doesn’t sound like the school is really helping him with positive behavior enforcement, but maybe you have one or could set up one? You know, like a chore chart, only it has behavior goals, such as “I completed my homework without complaining,” or “My work was completed neatly.” Choose 5 goals for the week and set a time limit such as daily or hourly. I once had a student that had a behavior chart that was marked every 15 minutes. It really worked for me with many student with severe, disruptive classroom behaviors. I have had students use behavior charts that they check off themselves, and ones the teacher has to sign after every period. I taught many grades, up through grade 8. Good luck and thank you for sharing your story. I know it seems crazy to those of us who think rationally, that we should not say something about the negative behaviors, and ignore them to an extent. I agree with you that sometimes you just “can’t take it anymore.” However, keep trying to focus on the positive behaviors as challenging as it may seem. You are doing a good job.