What kind of parent gets frustrated by their child with #Autism?

Holding it together at school and exploding at home

How about some awesome news

What kind of parent gets frustrated by their child with #Autism?


As a matter of principle, I try to avoid giving advice because there are so many differences in our lives and familes that any advice I would offer,  may not translate into something that would benefit someone else.

That being said, I wanted to share a few words and I hope that you take them to heart. This is of course, my personal opinion but I think it should apply to most of us (most of us being special needs parents).

It’s really easy to find yourself frustrated and overwhelmed by our kids behaviors or even the complexity of their needs.  I do.

The only thing I’ve found easier than getting frustrated, is feeling guilty for being frustrated. It’s an endless, vicious cycle that can consume you. 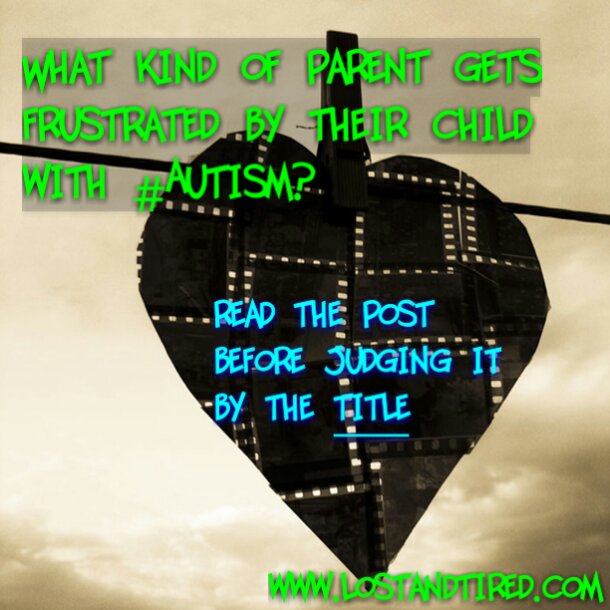 What I would really like you all to know, is that it’s okay to feel frustrated by our kids.  It’s okay to be overwhelmed by their behaviors as well.  Yes, I know that most of these behaviors are outside of their control but that doesn’t make said behaviors, any less challenging to deal with as parents.

You have to remember that you’re not only a parent but a human being as well.

As a human being, we are built to experience a wide variety of emotions, frustration and feeling overwhelmed, are among them. Another debilitating and crushing emotion that can rear it’s ugly head is guilt.  I would bet a shiney penny, that you are all too familiar with guilt.

I learned a long time ago that I can’t control whether or not I feel frustrated or overwhelmed, much in the same way my kids can’t control some of their respective behaviors.

The only thing that I do have some control over is whether or not I feel guilty for getting frustrated or overwhelmed.  For a really long time, I was consumed by guilt because I would think, what kind of parent gets frustrated by their child with Autism?

Eventually, I was able to answer that question.

So if I asked myself that same question again, it would go like this.

What kind of parent get frustrated by their child with Autism? The answer is exceedingly simple.  A human parent.

Look, as human parents, we have no control over whether or not we get frustrated or overwhelmed. We do however, have control over how we deal with these feelings. Talk to someone.  Connect with other special needs parents that can relate.

Personally, I’ve learned to embrace these feelings because I’ve realized that it’s “normal” to feel this way.

Once I came to that realization, the guilt just sorta melted away.

The way I see it is this, there are plenty of things in life that I’m going to feel guilty about, being human isn’t going to be one of them. I know that even when I feel frustrated or I find myself overwhelmed by my kids challenging behaviors, there is at least one feeling that outweighs them all.

That feeling is pure, unconditional love.

How beautifully written. My kids tell me I need to let things go. Church tells me (and I believe) to leave all this at the alter. I do and then I grab it back. Me doing that has nothing to do with me not trusting God because I do, but I think as parents we want the best and don’t know when to quit grasping at straws (because I know all these straws aren’t straws). I do no in my mind that if I dwell on something that I still feel guilty about from 10 years ago does not good and  that is my choice to dwell or not to dwell and I am working on not doing that. I love my children, I do know I have screwed up less than my parents lol, but I never know what is enough. I did find something helpful you might try. if you are feeling guily, rolling something around in your mind without really wanting to, or anything like that imagine (and I HATE the whole imagery thing so it is not that) a circle or stop sign shape in whatever color, probably one you like, and as soon as you do that it is impossible to dwell on what you were dwelling on because even though we think we can think two things at a time (multi tasking) you will see that you cant imagine the big purple circle and the bad thought at the same time. this has gotten me over a couple of humps where out of no where or on purpose a negative thought comes to mind and then i start dwelling on shoulda, coulda woulda.

All parents get frustrated …

Any parent raising any child special needs or not will occasionally feel frustrated and overwhelmed, it is a normal human condition to have these feelings. It is how we deal with them that is important.

Most of the time I’m living in downtown Frustrated, right on the corner of Overwhelmed and Losing my mind. 😉

Oh boy. I get frustrated with my high functioning autistic adult son. He has behaviors that look, on the surface, to be avoiding due to laziness. However, he is OCD with ADHD and anxiety disorder. So inside his head is a lot of stuff that doesn’t show on his face. So if I come home from work and he’s put off doing a chore, I may get annoyed. But more and more I try to set more realistic goals in a reasonable time for him. He can’t help it so often. If he and I are talking I am amazed by what is actually going on in his mind. In spite of a high IQ, his thought processes are completely different than an NT person. Not worse, but different. And something that seems simple to think and do, may not even occur to him.
Now I am more frustrated by the fact that he would be lucky to get a job and keep it with all these disorders hindering him. The American workforce is pretty unfeeling and uncaring of people with disabilities, especially ones that need a lot of special consideration. Our world isn’t kind to the disabled.

sometimes it’s difficult for me to see the difference

Oh I’ll willingly admit it lol….I get frustrated all the time…and I’m also willing to admit that in comparison to at least a decent number of autism parents I have it easy. I just have to make sure I’m not snapping and flipping out on my kid for things he can’t control

Every parent gets frustrated by their kids: asd or nt. 🙂