Could today get any worse? Wait.. I take that back, our water was just shut off

We have been transferred to the infusion lab and Gavin’s being prepped for his IVIG Infusion again.  His Benadryl is on board to help make the process less stressful on his body.  They are pushing the Zofran right now, so he doesn’t throw up.

The IVIG should start in the next 30 minutes.

Physically, Gavin’s doing much better than he was.  See below for a before and after picture.  The difference is pretty amazing. 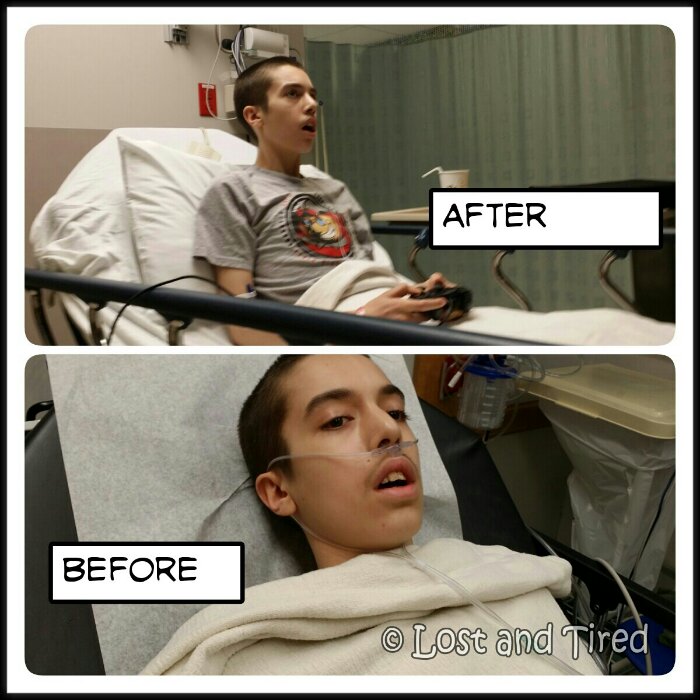 I’m still concerned because he needs to eat lunch.  Eat lunch could cause more problems but he needs his strength and we’ll be here the rest of the afternoon anyways.  He hasn’t eaten anything since last night so he’s really hungry.  We have to try and keep it on the lighter side though.

One of the things that I’m still concerned about is the fact that as we transferred him to the infusion lab, his back was drenched in sweat.

That is only physically possible during a crisis and it usually means it going to be a bad one.  I was feeling pretty good until I discovered this.  Now I’m freaked out again but trying to relax.  Below are a couple of pictures of things that only happen during a crisis and are conclusive evidence that one is taking place.

The reason I’m so uncomfortable is that this crisis has played out differently than what we normally see.

The rash and sweating both appeared while his vitals were relatively stable and that’s never happened before.  He goes through these shifts in presentation.  When these shifts occur, everything becomes unpredictable and so I don’t know what to expect. 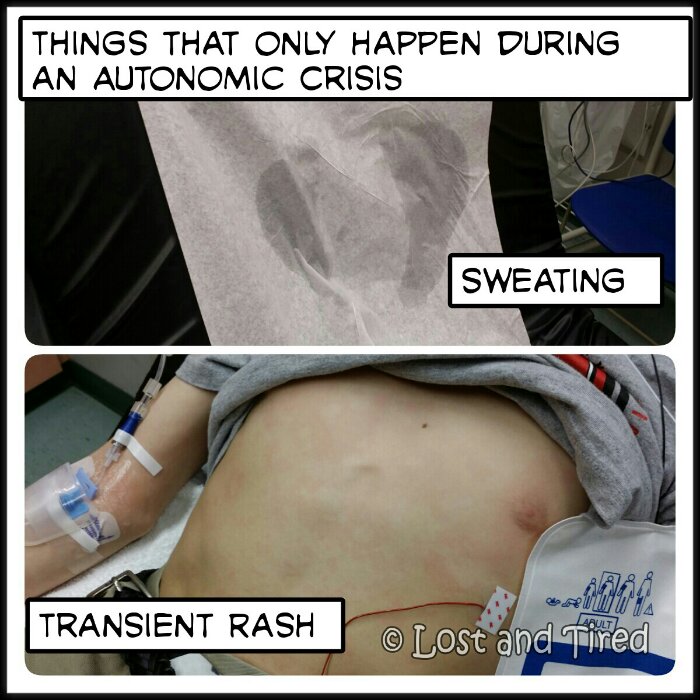 Right now he’s playing video games and waiting for his lunch.  All signs point to him doing better and hopefully that will hold true.  I’m cautiously optimistic about everything.

I have to admit that I’m so stressed out that my chest hurts when I breath.  It’s all anxiety but it still makes it harder to present to Gavin as though everything is okay and I’m not worried.

I’m listening to some music and trying to relax.  Deep breaths……

Thank you all for your continued thoughts and prayers. We definitely need them.

Have you made an inquiry to the genetics department at the Mayo Clinic in Rochester, MN? I was diagnosed at the age of 6 with a very rare and at the time life threatening metabolic disorder. This was back in the mid 90’s so getting information off the internet wasn’t an option at that point.

Anyways, I suggest heading over to Mayo, hopefully they can sort Gavin’s physical health issues out. I’m not sure I’d be alive today or at least as high functioning as am had my parents not made the decision to take me there. We had gone to other hospitals, specialists and even the U Of M but nobody got even close to the diagnosis.

Anyways, hope to Gavin bounces back from this (And yourself and Lizzie too!) 🙂

i am glad that you are but am sad that you have to document these things to make sure people understand they are real. My kid has a transient rash. i never heard it called that. it is crazy when you can have a rash one minute and not 15 minutes later. what is also so weird was my kid could be in terrible pain and have other issues that should have showed up on the monitor but didn’t and it took forever to get the doctors to listen to us (him). I started bringing the video camera. i got better service and documentation.

Glad things are turning around. Breathe deep. You’ve go this.

That rash almost looks like what happens when skin gets really cold, I dont remember what it’s called. But you know how when your hands get cold and they turn kinda white but once they start warming up they get pink-ish and splotchy? That’s what it reminds me of. Just a random thought.