Hopefully we can avoid taking Gavin to the emergency room tonight -

Don’t look at me, I haven’t had my beauty sleep

Hopefully we can avoid taking Gavin to the emergency room tonight

I wanted to update all of you as to how Gavin’s doing.  Since he’s arrived home, he’s been sleeping.  By the time you read this, he’d have been sleeping for well over 12 hours.

Throughout the day, I’ve been waking him up and having him drink water.

Unfortunately, he has only taken in about one tenth of what he’s supposed to each day.  This is really concerning but I don’t want to push to much and have him end up vomiting again.

There’s no chance of him going to school in the morning. 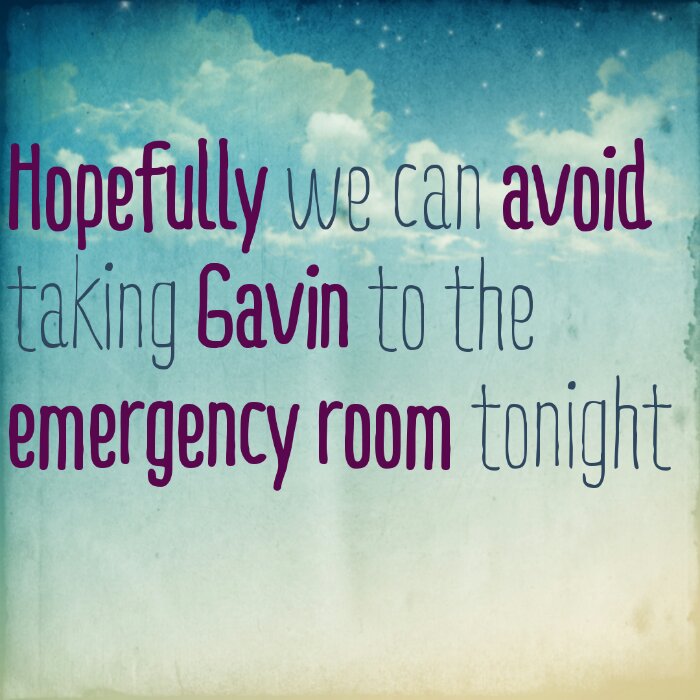 I’m gonna set my alarm for every 2 hours and make sure he’s taking in fluids.  Hopefully in the morning he’ll be doing better.

We’re gonna take all day tomorrow to get him back on his feet.

If he’s not doing better, we’ll probably have to seriously consider taking him to the ER.  He’s going to need fluids via IV.  You’re not going to vomit from IV fluids because they going directly into your blood stream.  It’s the fastest way to hydrate someone.

I realized today that while I’ve been distracted by the Autonomic concerns, there was something else that I was not thinking about. It’s sort of a forest for the trees type thing.

This is the 2nd illness Gavin’s has acquired in the past three weeks.

While that may not seem like a huge deal, this is only the 2nd time he’s been sick in the 3 years since he’s started his IVIG infusions.  His immunologist says that it’s okay if he gets sick, we just have to keep a close eye on him.

My worry is that it seems like somethings changed because he’s still not gotten rid of the upper respiratory thing and now he’s got a stomach bug.

Right now he’s resting, medicated and slowly hydrating.  This is really about all we can do for now.  He’s either going to pull out of this or he’s going to need to go to the hospital.  We want to avoid putting him in a car because that will likely make things worse.  That’s one of the only reasons he’s not already gone to the hospital.

We’ll see how the night goes.

As always, I would really appreciate you keeping Gavin in your prayers.

iv fluids are great as they do bypass the stomach. I am sorry you are having to think of that option. i understand where you are coming from regarding you have to get the fluids in him but then he is going to throw up. I think it is worse for us parents that we know that it is going to happen. it is like my kid needs to eat to get some calories in but if he throws up he will not be able to eat for a longer time. it is a weird vicious cycle to go thru and we dont know what to do

Maybe the tummy thing is just because his respiratory thing weakened him? I tend to get illnesses consecutively

Hope he gets better

Praying for him. I hope he can hydrate without the trip. Good luck and try and get some rest yourself.

My 3 year old is getting over some kind of virus (diarrhea with no other symptoms) and I had to take her to the hospital for dehydration a few days ago. We ended up staying the night for observation and she got 3 bags of fluid. Thankfully she is much better today. I hope Gavin has a good night and is able to avoid the IV! Good luck!