Suffering - Lizze is having a really rough day -

Exhausted – May God have mercy on my soul

Suffering – Lizze is having a really rough day

Lizze is in pretty rough shape today.  She’s been sleeping since last night, with the exception of about an hour or so this afternoon. I woke her up around 1pm because she needs to move around and take her meds.

She went back to bed shortly after that.

She’s not been sleeping well at night because her menopause symptoms are brutal and not allowing her to sleep well.

Part of this is a result of her having to suddenly stop hormone replacement therapy because of an allergic reaction to the patch that delivers the hormone.

For the last few weeks, we’ve been trying to get a new medication approved through insurance.  The Cleveland Clinic wants her on a cream based medication that she rubs into her arm each day.  Unfortunately, insurance isn’t wanting to play along. 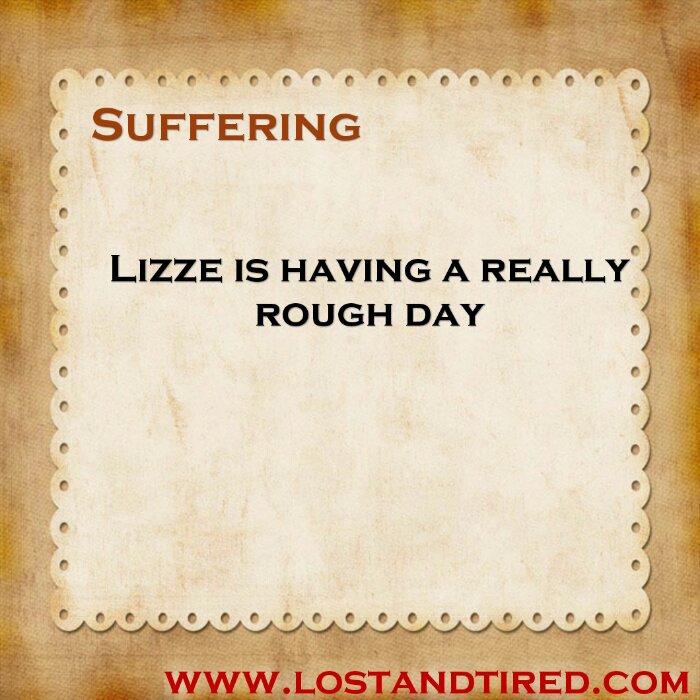 Insurance wants her to try a few other patch based medications first.

The problem is that she’s likely going to have the same reaction to the new patches because it appears to be the adhesive being used.

Her doctor has explained that but insurance is continuing to be difficult.

On the plus side, at least they are willing to pay for the new patches.  We’ve been paying out of pocket for the previous patches because insurance wouldn’t pay.  At least there’s that.
Physically, life just isn’t being kind to her.

Emotionally, life hasn’t been kind either.  Borderline Personality Disorder is not easy to cope with, for anyone, least of all Lizze herself.

I’m so grateful that she hasn’t given up.

I just wish that she could catch a break and life would dump a few less challenges in her lap.  She’s miserable on all fronts but getting the help she needs to eventually recover from at least part of this.

There’s a very, very long and unpaved road ahead but we’ll get there together.

Can she take oral meds for menopause? Lots of dirt cheap ones out there

My 35 yr old NT son became allergic to adhesive from band-aids & patches for pain, he ends up in a real mess. As a child he didn’t have this allergy…

Hope the new meds are approved soon and they work.its no fun being I’ll at all and can I just say,(with no offense to Lizzie meant,)that I think she’s very lucky to have a great guy by her side,because let me just say that I literally have to be hospitalized to catch any kind of break (or nap or anything) when I’m sick..great job being a real dad and husband,that’s what it’s all about 🙂

I hope that she feels better and is able to rest.  I can relate to some of her struggles.  I suffer from chronic pain and have symptoms of fibro.  It is so annoying to constant be in pain.  Hopefully, she can enjoy Gavin’s birthday later this afternoon.