This bully will face the music today

Why today made me heartbroken and physically ill

This morning we marched Gavin into the principal’s, he sat down quietly and didn’t say a word.  As Gavin wasn’t going to talk, I informed the principal as to why we were there.  I told him that Gavin is bullying someone in his class.

You could feel the atmosphere change and I explained what Gavin had been doing to this kid… The principal went from hey Gavin, how you doing to Gavin, why would you do something like that? 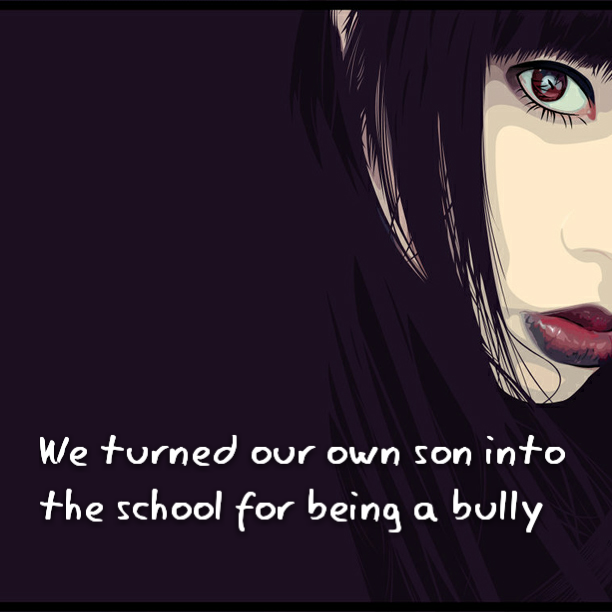 This was handled really well, especially considering that this principal is new this year and wasn’t privy to Gavin’s previous history of targeting kids and seeking out revenge.  I’m not gonna lie, I felt an overwhelming sense of satisfaction seeing Gavin squirm in his chair as he was forced to face the music for being cruel to someone in his class.  He MUST learn that this is unacceptable.

The principal was very firm with Gavin but at the same time calm and in control. He laid down the law and explained that this student particular student was especially vulnerable because he would be very submissive. That explains why this was never reported.  When I heard this, I was really pissed off.

What really struck me was his teachers reaction. When we explained exactly what Gavin had been doing, it was like a light went off and everything made sense.. He said you know what, “I can pinpoint when this actually began”.

If Gavin wants to get at someone, he will do so in a way that has maximum impact, while still flying below the radar and keeping himself out of trouble.  Unfortunately, it’s really hard to catch him in the act but when we do, it’s eye opening to say the least.

The best way to describe it is like those pictures that have a picture hidden in them.  When you first see it, you see one thing but if you stare at it long enough, the other picture emerges and from that point on, the picture jumps out at you every time you look at it…

Here’s the reality of the situation.. I don’t believe that Gavin has a conscience and that’s the general consensus of everyone involved with him, outside of school. It’s just the way he’s wired and while it’s not just fault, it does present us with serious challenges…

Gavin’s the kind of person that honestly scares me.  What’s on the outside and what’s on the inside are worlds apart.

On the outside, he’s very charismatic and disarming.  He can be really nice. On the inside however, he will do whatever it takes to get what he wants or what he needs.  He doesn’t care who gets hurt in the process because he’s the center of his universe…

In other words, there’s a good chance that Gavin’s a sociopath… Now they refer to that as Antisocial Personality Disorder.

That’s not meant as a slam on him at all.  It doesn’t make him a serial killer in the making either.  It simply means that he has no concept of right or wrong, no moral compass and simply does not possess a conscience…

Am I a bad person/parent for saying that? You’re welcome to your own opinion… However, that’s the reality we are dealing with.  This doesn’t make Gavin a bad person either, it makes him exceptionally challenging…..

Teaching these lessons is why Gavin was sent to you. You rock! Decisions are hard core. Well done

You did the right thing, i am concerned that it could also go either way with my son, be the bully or be bullied. Time will tell when he gets to senior school.

Good on you! There is nothing wrong being honest with yourself and the situation. This is what it takes to be a great parent. It must be so tough to stay on top of it all.

Kudos to you Sir. My respect for you rises daily.

Our End of the Spectrum

Thank you for sharing your truth

Wow … so much comes to my mind after reading that. I commend you for doing something that had to be so very hard for you to do. And then to transition that experience into your blog and share it with so many people instead of hiding behind it … I am sure many parents can relate to this. I wish more people would share their raw emotions and set this type of example for others to follow. Today may not have changed Gavin’s future behaviors, but you can lay your head on your pillow tonight knowing that you did the right thing in holding Gavin accountable for what he has done 🙂

.A tip for you though ….If your so lost and tired …try changing what your doing ….cus it aint working

julh BradyFerguson  your opinion means nothing to me ….i just voiced mine …have a great day

BradyFerguson Are you saying that if your child bullied someone, you’d let them get away with it?? Rob isn’t the one sucking balls around here.

BradyFerguson  Congratulations, you’ve just revealed that you’re completely ignorant about what it takes to raise children with complex medical, emotional and psychological needs while also being completely void of empathy. Give yourself a pat on the back.

in my opinion your parenting sucks big balls …you asked i answered
why would you write this ?? don’t tell me to help other parents because thats BS
your name you go by is “lost an tired” ….how do you think that makes your kid feel? …
what if your wife went by dickless and spineless …how would you feel …Wake the hell up
The internet is not a platform for parents to get a virtual pat on the back ….Still
shaking my head at this one

I just wanted to say I totally understand. My stepson is the same way, and soul crushing is a great description.

I don’t really have any input other than to say I completely and totally understand. My stepson is the exact same way, and it is absolutely soul crushing (especially since his bio mom is the same way and we constantly have to protect him from her). He is still going through diagnostic processes so we can tailor his supports better. I just… understand.:)

Lost and Tired  julh  There’s always the possibility that he’ll lose specific skills like the ability to do maths or spell or his memory will deteriorate..if his cognitive skills are truly regressing. What I would keep in mind is the bigger picture function of attending school – being functional in society. A lot of people get by in life with less academic skills than Gavin already has. What’s important for him is learning to respect other people, abide by rules that are in place to protect everyone and accept that there are consequences when these rules are broken. I’d also want a functional/independence/vocational focus on his education – teaching him about money, shopping, cooking, organisation etc
I think I kinda went off on a tangent there…

julh  that’s a really good question Julia…. What I struggle with is knowing exactly where he is and what is what…  How much is Cognitive Regression and how much is him playing us?

What this makes me question is Gavin’s cognitive capacity – whether it’s still more intact than you thought. Or whether him “slipping up” at this stage is an indication that his cognitive skills have slipped a bit. The key for kids like him is always motivation. He’s not particularly motivated to complete his school work to the best of his ability. He’s extremely motivated to get revenge on this boy as he feels he’s been wronged.
Antisocial personality disorder is definitely a scary thing to face. In some cases I’ve recognised it in children as young as 5 and it’s just a bit soul destroying.