The sh!t hit the fan tonight and things got really bad

So far so good….with one exception

The sh!t hit the fan tonight and things got really bad


Today has been an absolute nightmare.  I don’t even know how to express how this feels. It goes against everything that makes sense and feels right.

This is so difficult because it’s gonna be nearly impossible to get key members of our support system on board with anything we have to do because not everyone wants to believe what he does. Not everyone will see him for who he is and what he’s doing.

In all honesty, if I hadn’t personally witnessed as much as I have, I probably wouldn’t believe it either.

Tonight was really tough because we had a major blow out with Gavin, not once but twice.  I don’t know if I handled it correctly or not but it’s not like anyone can guide us through this or there exists an instruction manual.

We’re on our own. 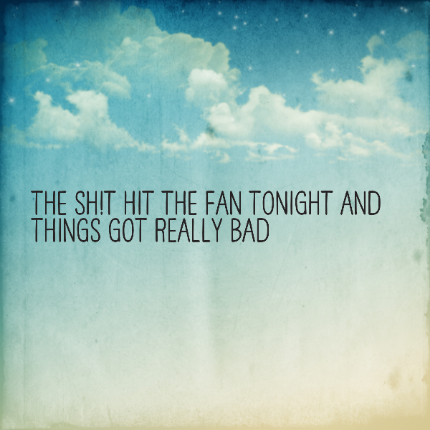 Dr. Pattie is out of options and so are we.

I went off on Gavin today because he’d spent the morning messing with Lizze and I’d had it.  I called everyone into the living room and let Gavin have it.  In that moment, I felt like I needed to get everyone on the same page.

Lizze sat with Elliott and Emmett while I had it out with Gavin.

I told Gavin that he needs to know that he will not mess with Lizze.  I was a big, scary, angry papa bear and I my goal was to make sure that everyone in the house knew what he was doing because that way Lizze doesn’t feel so alone and Gavin knows that everyone is watching.

It’s far from a solution but it’s a stopgap until we figure something else out.

Elliott and Emmett need to understand that Gavin cannot be trusted and they need to be careful.

Gavin was really upset and pretending to cry, although there were no tears.  After I made it very clear to him that I will defend Mommy from anyone, including him, I sent him to his room.  I felt horrible that I had to do that to him but the truth is, he needs to know that everyone around him is keenly aware of what he’s doing.  This makes it much more difficult for him to do anything because he will only target Lizze when he thinks no one is aware that he’s doing it.

This is a known reactive attachment behavior and no one really knows why Mothers are the primary target but it’s a known fact that they are.

I mentioned how horrible I felt for doing what I thought had to be done.  Well…I learned that I don’t need to feel bad because Gavin neither learned or cared.  The moment he was out of site,  he shut everything off as though nothing had happened.

It didn’t take him long to attempt to get under her skin again because he was back at it after dinner.

As I promised him, I dug into him pretty hard and I let him have it.  Nothing physical. I just made sure he knew I was pissed off and that I was putting a stop to this.  As this went on for a little bit, Lizze stood up for herself and Gavin responded by basically freaking out and getting into her face.

I immediately put an end to that. I backed him into the corner and pinned him against the wall (without hurting him).  Gavin’s getting very tall and powerful.  We have to be very careful that he doesn’t get physical because he will hurt someone.  All I did was assert myself and made sure he knew that he had to go through me if he wanted to get tough with her.

Again, we have not had to get physical with Gavin and we never will if we’re lucky.

The only thing I can think to do right now is put the fear of God into him. Unfortunately, these are mostly empty threats because getting physical with him will serve no purpose and could honestly become quite dangerous.

I’ve told him at least a dozen times today that we love him but this behavior will not be tolerated.

We’re back to needing to put alarms on his door and even cameras upstairs so we can monitor what he doing. This is an absolute nightmare and I fear it’s only going to get worse.

hell yeah i would have alarms and cameras and a toliet alarm. you know I am all about some cameras. i know if frustrates you even more that when you have had to go as far as you felt you had to go, and in the end it didnt seem to matter. Serious to God, i would have my kid on some thorazine or something and he cant sit in the corner drooling (I know that sounds very very horrible if anyone has a loved one out there like this, please dont take offense as none intended) before he is going to hurt me phycially. i would do that before i put him away some where for sure (even though you might have to) and this comes from a mama that loves her kids way over the top (for real we laugh about how much i love them in a good way). Please tell lizzie or yourself to email or message me and i will give you my phone number as you can call me for another ear to listen or vent or something. it all sounds so scary and i know yall are practically alone in this. I know you said dr pattie is out of options but i just cant take that. i know this may sound stupid but is there anyway to get him a lot of some kind of exercise that will wear him out. also i want you to know that my nephew growing up would rage at his parents (mostly his mother) but he never did it in front of anyone else. i remember my sister saying no one believeed her that he is that bad. honestly, i believed it but i thought she was a bad mother (she kinda was but really she was fed up) in his first 18 years i never saw what she was talking about and when i finally did witness it it scared the crap out of me. She is mad to this day that I didnt take him in at age 14 for a couple of months. just now i realized why. YOUR BLOG HAS CHANGED MY LIFE AGAIN!!! she really needed to get away from him vice versa. we had three nieces and nephews that we ended up taking in for a couple of months at a time over the years when the kid(s) were young on my husbands (ex now thank God) side of the family cause they were getting unruly or with a bad crowd and when when my sister asked (which i didnt know she was at the end of her rope and things were so crazy at her house) if her son could stay a couple of months i said no. the reason i said no was because her kid was 14 smoking pot and i didnt want him infulencing my kid that was 12. i had tried it the first time at 11. I thought i was right up until this very moment. my first kid was just born “good” and probably would have not got off track. i just didnt think i could risk it. as of today i know i abandoned my sister (she is still bitter about it today) I am going to apologize to her this weekend maybe this afternoon and get her to know I meanit instead of saying I am sorry but… You know i say your children are so handsome and maybe gavins good looks and his cool mannerisms reminds me of my nephew. (he is now like 28, on his own but doesnt come to family gatherings or anything, doesnt come to see me much but when he does he is so loving and affectionate and i am too, no girlfriend even though very handsome as they get on his nerves too, has a great job with a great boss that must understand how he ticks as he has been there for 3 years now) please tell Lizzie from one great mom to another, that i am here to listen, she already knows i am opinionated but the great news is that if people dont take my suggestions i dont get upset. I am very nice so i would never talk mean or in a mean tone and i wont judge (like i seem to here lol) so the offer is open to email me or whatever for my phone number. tell her i can hold the conversation if she is upset cause i am sure you can tell i talk alot, but i am a great listener too. Genuine offer here.

Your postings break my heart. You know what you need to do. Doesn’t make it any easier, but for the sake of Lizze and the boys it needs to be done. Soon. 🙁

This sounds like it could become dangerous. Not because you are behaving unreasonably in this situation, but because you say that “getting physical with him will serve no purpose and could honestly become quite dangerous.” My gut says that shouting intensely at him will create the same kind of problem, if at a lesser level (obviously, I’m not in the situation, so I mention it only as an outside perspective to consider). I get that it may allow Lizzie to feel safer, which is clearly important, but maybe something without shouting at Gavin would serve the same purpose? A second reason it sounds dangerous is that it brings you further into the mindset that anger is a potential way to change Gavin’s behavior. This instance itself isn’t clearly bad, but anger as a tool could lead to bad situations, either with Gavin responding with anger and violence, or with you/Lizze/Emmett/Elliot losing some perspective and responding with excessive anger. Just some thoughts, and more potential reasons to find Gavin another place to stay. The best way to love him may be by giving him a place to stay without direct family and the strong emotions that family creates. Best of luck in an impossible situation.