PLEASE READ THIS – Dedicated to all my #SpecialNeedsParents

What’s wrong with me? I never learn my lesson………

We had an exhausting everything last night and I was simply too tired to write about it.  There was an incident last evening before th3 boys went to bed and it became a bit heated.

Apparently, Emmett was standing on the couch (which he shouldn’t have been doing and we talked to him about that).  Gavin was coming out of the kitchen from feeding the dogs.

Somehow, he found himself standing inside Emmett’s personal space as Emmett was stepping down from the couch.

This resulted in Emmett face-planting into the table and getting hurt, although not seriously. This happened in the span of less than a minute since I had walked out of the room. 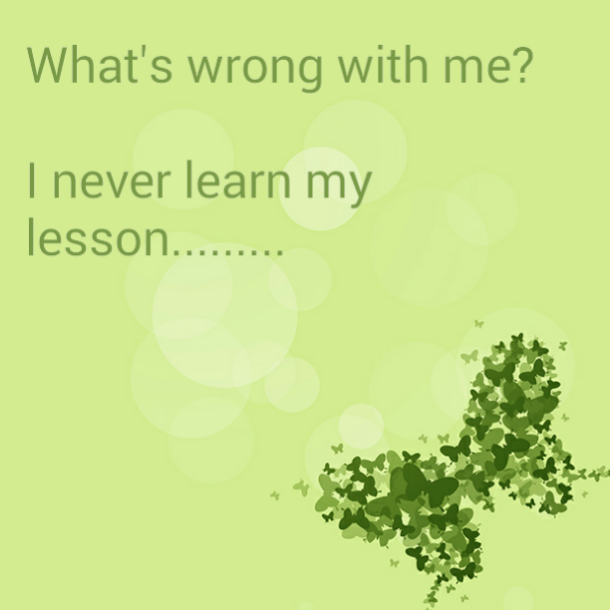 Lizze and I were changing places when this occurred.

I was running to the bathroom real quick and she was on the steps, heading downstairs but was still around the corner when Elliott came running up to her saying that it looked like Gavin had pushed Emmett into the table.

Emmett was fine but a bit shook up still…

We were trying to figure out exactly what happened but Gavin couldn’t give us a straight answer and while Elliott’s and Emmett’s stories stayed the same, Gavin’s kept changing.

He had no reason to be standing where he was when Emmett was stepping down from the couch.  He had no reasonable explanation for why he was standing inside Emmett’s person space at the exact moment he was trying to get down off the couch…

I got pretty upset because all I wanted was an explanation for why he was even standing there and Gavin couldn’t answer or rather wouldn’t answer with anything other than stomping his feet and jumping around.  He changed his story a few times and I was fighting a battle that I would never win because I was using logic and reason to attempt to identify the motives of someone that is  either logical or reasonable.

My chest felt like someone was sitting on me and my head felt like it would benefit from being repeatedly trusted into the nearest wall.

I’m doing my best to keep the peace within our home.  However, I chose this battle because the likelihood that this this was an accident is slim to none. I wanted to understand what happened because even if Gavin had only violated Emmett’s personal space, that needs to be dealt with.

If Gavin simply wasn’t paying attention and walked into Emmett, the exact moment that he was stepping off the couch, he still needs to be reminded about being responsible for where his body is and what it’s doing.

If this was Gavin running Emmett into the table, which is where the evidence points, that needed to be swiftly addressed.

Thankfully this happened at bedtime because when I got too frustrated with Gavin’s responses to my questions, I simply repossessed his tablet and sent him to bed.

The mistake that I seem to make is that I try to reason with him.  I want teach Gavin that this type of behavior is unacceptable.  You’d think after 13 years that I would have given up on Gavin actually learning his lesson but sadly, like a month to the flame I end up getting burned.

What’s wrong with me that I never learn my lesson………

Take a minute to step back, and realize that siblings can be rough on one another. My boys get in closed fist punching matches. Now, I stop it as soon as this starts. And usually it STARTS off with playful wrestling. But I separate them and usually I need to get one of them doing some deep muscle movement. I get my youngest to move or push a box of my old college books across the floor. It tires him out and works that need for sensory input–all while the oldest is sitting down, where I can see him, tasked with reading 2 chapters from a book.

You handled it. As soon as it went down. And just because my youngest is non-verbal and severely autistic…..DOES NOT give him a “get out of jail free card” from hearing what he did wrong, that he shouldn’t do it, and trying to impress upon him respect for others and their space. It may be that I tell him differently, in a series of conversations or pictures shortly thereafter, than I would a normally functioning child….but he still knows right from wrong. And if he doesn’t, it’s up to ME as his PARENT to teach him. That’s all you’re doing. You’re teaching your child right and wrong. And sometimes lessons take repeats to learn.

Don’t beat yourself up, you do the best that you can.

i agree with kim

There is nothing wrong with you. You are a father who loves his son and who wants him to learn lessons, just like any parent.

Lost and Tired
Reply to  Kim