This MUST STOP: Another child with #Autism abused (video)

This MUST STOP: Another child with #Autism abused (video)


I’m not a violent person by nature but I’m so sick of people charged with the welfare and safety of our kids with Autism, physically abusing them. I know what I’m about to say isn’t politically correct but I just don’t care anymore.

The man (and I use the term loosely) in the below video needs to get his ass beat. ANYONE that puts their hands on a child, especially a special needs child, is a fucking coward. I don’t care what his reasons are for smacking this 10 year old little boy with Autism.. There is absolutely no excuse for an adult to do this. What’s even more infuriating is the fact that it takes more than simply watching the video to decided what to do with this man. 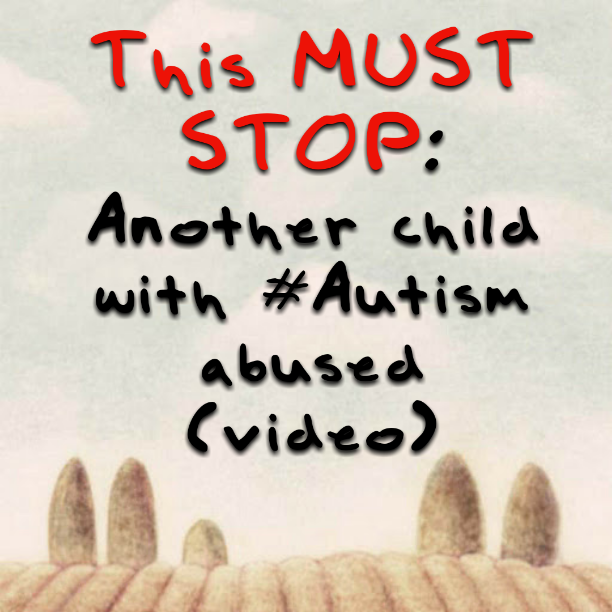 Is it really that hard to look at this situation and say “you’re fired” ???????? The parents should be the ones to decide if they want to pursue criminal charges but there shouldn’t be any thought involved in whether or not this man should be terminated and no longer allowed to have contact with children.

I understand due process but honestly, if this child wasn’t Autistic but instead a different race, we wouldn’t even be having this conversation.

I don’t care if this guy has a spotless record and this is an isolated incident. Once that line is crossed and just to be clear, it was, there’s no going back. Please don’t even bother trying to tell be some bullshit about how difficult that child’s behavior was to manage.  Trust me, you’re preaching to the choir because I’m a father to three boys on the Autism spectrum, one of which is a sociopath. I fully understand challenging behavior and how far it can push someone.

That being said, in the 13 years I’ve been a special needs parent, I have never responded to any of my children in this manner. Believe me, I’ve been pushed well passed my limits on many occasions but have never reacted the way this bus driver assistant did.

Look, I know how frustrating working with an Autistic child can be. That being said, there is no excuse to strike one of these kids because you aren’t capable of removing yourself from the situation temporarily and regaining your composure. We all get frustrated and we all have our limits. However, as adults we are responsible for recognizing these limits before we loose our cool and end up crossing the line.

Once you cross the line with a child, there’s no way to undo that action.

The reality is that if this guy did this once, we now know he’s capable of this type of reaction and he cannot be allowed to work with kids….period. I’m sorry but when you break that sacred trust, I highly doubt any parent will want you to have contact with their child.

I would also like to say that if anyone out there wants to play the it’s not this adults fault because this kid had Autism and was being difficult card, your argument holds absolutely no water and only shows your ignorance.

The disturbing video shows the man, investigators tell us is James Lambert, hitting the boy, threatening him with a fist, and then slapping him again. Lambert is out of jail on bond and facing child abuse charges. For now, Lambert is on administrative leave. The school board will vote on his termination June 17. In the meantime, we’re digging into Lambert’s record.

Linda Cobb, a spokesperson with Pasco County Schools, tells us Lambert doesn’t have other blemishes on his record. We asked if the district plans to start reviewing bus video, considering kids with autism aren’t the best at communicating issues.

“Let me be clear,” Cobbe said. “This was an isolated incident.”

The district still hasn’t released one angle of the bus video. Cobbe tells us we could get that sometime this week.

Related articles across the web

What a wonderful example of how hitting or spanking is NOT the way to discipline a child, especially a special needs child. He slapped the little boy and the little boys reaction was to slap back. Horrible. I would have a hard time not hurting the man if that had been my son.

i agree we need to thank the people that do a good job. this was awful. as much as my kids dad is useless (sorry to say) i could count on him to take care of this situaiton for me

That’s awful. Just awful. We should all remember to thank the gentle people in our children’s lives.

That’s a really good point Dot. We need to really appreciate those that do right by our kids.