I’m overwhelmed just thinking about all of this

The Journey Towards Independence: Gavin had a little victory

What they said actually made me take pause and realize how right they were.

The comment was made that we could no longer be objective when it comes to anything Gavin does. Wow… There’s a whole lot of truth in that statement and here’s why.

Gavin’s behaviors are such that we never know for sure, where he’s coming from.  He compulsively lies about everything, including things that don’t even matter and so we never believe him. There are times that I’m sure he’s telling the truth but because of his history, we have to assume he’s lying unless we can prove otherwise.

How else can I say this?

Gavin has put all of us through so much and he continues to do so, that it’s almost impossible to see any redeeming qualities anymore.

We’re dealing a RAD child who’s already considered a full blown sociopath, even before his 18th birthday.  Everything he does has an end game and when he does something nice there’s always an angle, at least most of the time. 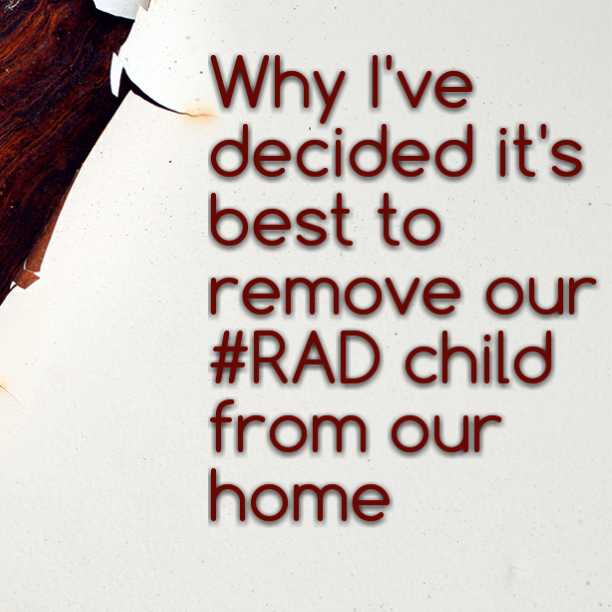 Is it our fault that we do this? No..  We are only responding to his behavior and have been conditioned to react this way based on his consistently hurtful, abusive, dishonest, manipulative and otherwise inappropriate actions.

We are reacting the only way we can, while ensuring everyone’s safety and trying to hold Gavin accountable so he hopefully learns from his mistakes.

That being said, where does this leave Gavin?

My reader is absolutely right by saying that we can no longer be objective when it comes to Gavin.

Let me try to give you an example.  Does Gavin truly lie to us about absolutely everything? Probably not.  There is some truth sprinkled in amongst the lies.  The problem is that we never know what’s true unless we can verify it with a third party or we witness it ourselves.

Gavin’s word has lost all meaning to us and he no longer has any credibility.

If we could still remain objective, we would be able to take each situation as a unique event and never have to make assumptions based on previous behavioral patterns.

If we could remain objective, we would be able to allow for the possibility that Gavin could be telling the truth, instead of having to assume he wasn’t.

In other words, because we can no longer be objective, Gavin can never gain out trust back.  His word means nothing and his credibility is zero.

We had no choice.

Again, where does that leave Gavin? Sadly, there is no longer any chance of us having any type of healthy relationship with him, especially if he’s living under the same roof.

Allowing him to continue living here, isn’t fair to anyone, including Gavin.  He’s set up to fail because kids with RAD don’t do well within the family dynamic. We’re essentially asking more of him than will ever be possible.

At the same time, we’re hanging on because he’s family and family means no one is ever left behind….ever..

The reality is that allowing him to live here isn’t fair to anyone us and certainly isn’t conducive to our physical and emotional health.  Right now we are literally falling apart at the seems and on the brink of catastrophe.

With that being said, I’ve gain a new perspective on this whole thing and it’s helped to remove a great deal of guilt from the equation.

We have to move Gavin out.  Whether it’s residential treatment, emergency foster care or a group setting, not only is it best for the rest of us, it’s best for Gavin.

I don’t think the guilt will ever completely go away.  However, once I accept the fact that this is really the only thing we can do to preserve what’s left of our family, there simply isn’t any other option.

One thing I can say with the utmost sincerity is this, my heart is absolutely broken by all of this.

Poor whole family. I don’t know how yall have been able to keep the pace of your life for so long. I let you know that my son was in the hospital in march and had a reaction to a drug and he was out of his mind in my presence for four hours. i was scared to death that it was going to be permanent and I thought he just finally went crazy as i am in awe of him staying sane with all he has been through). it was the first time he wouldnt/couldnt do what i told him even though he knew that it was best. He is 22 and has a lot of practice unfortunately being a good patient. I was ready to go insane after only FOUR hours. I know yall love gavin and i just hope you are able to find a place and have it paid for. i dont know how that works except it is hard.

I think those of us who do not have direct experience with a RAD child only fool ourselves thinking we understand we don’t and we can’t. My heart aches for what your whole family is going through. I hope Gavin gets the help he needs but moreso** I hope your family can heal and those bruises you own from beating yourself up over what is necessary for your family to not only function but thrive fade.

** that does not mean I don’t care what happens to Gavin, I do and I know from what you have said and what I’ve read elsewhere that the step you are taking while incredibly hard for you is the best move for Gavin.

Rob & Lizze, as someone who has healed from RAD and is now helping others, I truly believe Gavin’s best chance at healing will come from being placed in a highly tr

…ined, rad-specialized therapeutic treatment foster home. Placing a child with RAD in a non-home setting will guarantee that his healing will be prolonged or not occur at all. Experience tells us that much. Sending lots of prayers up for your family.

If u need to find a rad specialist family in your area, I can assist with that.

Do you mean that residential treatment is worse than therapeutic foster care…? Is there any way you could shoot me an email?

Such is my experience & wat the leading rad authorities say. I’d be delighted to email but don’t have yours. I will give u mine. Elle in Lincoln at the g place for mail dot com. Of course the first three words are connected with no spaces and lowercase with no underscores.

I’m not sure what that is but you can use the contact me link at the top of this page. That would be awesome. 🙂

I’m very sorry this is where you are. Sometimes, as you said, the dynamic is not beneficial to anyone. I understand your heartbreak and I only hope that time and some hopefully beneficial experiences for Gavin will make it a bit easier. While we don’t have RAD in our home, dealing with early onset schizophrenia (16) and some type of bipolar looking mood disorder in our 9 year old along with two neurotypical kids has made life at many points, very challenging. The worst years filled with violence, lots of therapeutic holding and suicide attempts made me seriously consider residential placement. You have to do what works for and is best for your family. No one can tell you what that is but you. Prayers for all of you.

Thanks Jenifer. I understand both of those very well as Gavin struggles with both. You’re absolutely right when you say they are challenging. I wish you all the very best a day hope everything goes works out. Hang I there and thank you for sharing….

RAD is incredibly rare and incredibly difficult to treat. Those readers who have never dealt with a RAD child 1st hand cannot, I repeat, *CANNOT* understand, no matter how you try to explain. Your decision to remove Gavin IS in his best interest.

I was a foster parent for many years and I had a RAD infant/toddler in my care at one point. Nothing I had ever experienced as a parent or special needs foster parent (before or since) could have prepared me for that little girl. She was 15 months to 28 months old whilst with me. And she was so very challenging on so many levels….

My experience with that little girl took tremendous energy & fortitude, in getting her diagnosed and treated properly, let alone living with her 24/7. And as she was so young, I did not have to worry about her being a threat to herself and/or others!
(my two bio kids were young, ages 5 & 8, and I also had a 2nd special needs foster-infant in my care at the time, as a single mum)

You are getting Gavin, and the rest of your family, the supports everyone needs to emerge healthier and safer from a very trying time. Gavin will be safe and looked after in his placement, receiving the best care that is available (and I know that placement may not be ideal or enough). Your other children will be safe and cared for and no longer at risk. You and your wife will have the safety and peace to continue to support your family’s many needs, including Gavin’s.

It is a win/win situation, though not an easy decision.

I think what you are doing Rob is incredibly brave and selfless. Letting go of a child for the reasons you are, is very courageous. My eldest daughter (12) goes through cycles of extreme violent behavior. She was found trying to cut he wrist with a deli knife, under her desk in school. She thought it was funny!
I often wonder how much more of this my family can take. My youngest has the same special needs.
I have so much respect for you. Keep up the amazing work.

Thank you so much. Let me say that what you are saying goes sounds really scary. I wish you the very best… 🙂

Thank you Rob, and may I say that you and your family are an inspiration.

Lost and Tired
Reply to  ShanEda

Wow. That is you so much for sharing. I’ve only run into a few people in my journal entry that have first hand knowledge of RAD. Most people are well meaning and try to get it but as you said, it’s impossible to understand unless you are living it.

Thank you so much for sharing your experience. One question I have is, were you the therapeutic foster care giver?