He's making himself sick over this stupid State testing -

Why getting my youngest with #Autism to school is so exhausting

He’s making himself sick over this stupid State testing


As of 1:30 AM this morning, both Elliott and Emmett will be returning to school. I should say that they are healthy enough to return to school. Elliott shouldn’t be a problem but I think Emmett’s going to be.

Why would I say that?

He’s already so nervous about going back that he’s woken up and climbed into bed with us twice.

Apparently, there was State testing last week and he missed it cause he was sick. These tests always make him sick to his stomach, even though he’s the kid with the highest scores. In fact, the last test had him scoring the highest in the school. He’s never done poorly on one but he puts so much pressure on himself, it literally makes him nauseous.

Unfortunately, he doesn’t understand the difference between anxiety-related stomach issues and actually being sick with a stomach bug. To him, they both feel the same and so they are the same.

I have no idea when this test was or if he missed it when he would make it up. What I do know is that this is a perfect example of Emmett beginning the day without the resources to deal with his shoes and socks.

I absolutely hope that I’m wrong and he does great in the morning but my gut is telling me otherwise.

At this point, I’m going to remain positive because if I put out positive into the house, perhaps that will help him to better cope with things.

My fingers are crossed and my prayers have been said… ☺ 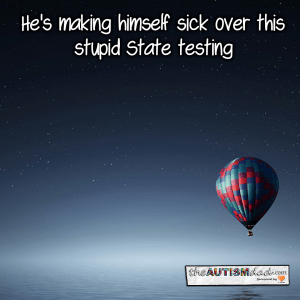