When your special needs child is functioning with a significant communication and language deficit things are challenging to say the very least. Emmett John is one such child. I spent 35 minutes this morning trying to figure out what he wanted for breakfast. I know he wanted cereal but I was doing something wrong because he just screamed and screamed. We tried three different cereals in 2 different bowls. He eats his cereal dry cause he can’t have milk. He actually prefers his cereal that way though so it works out.  I even tried mixing them and that was a bad idea cause that really set him off. He doesn’t like his food to mix but I thought I   would give it a try anyway. It’s a sensory thing and many kids on the spectrum have this. I used to have to pick the seasoning out of Gavin’s pasta sauce before he would eat it. It’s just all part of the job. The advantage though with Gavin was he could talk and Emmett not so much. 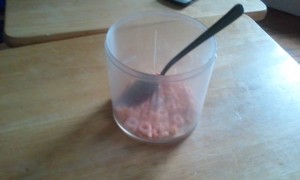 Flash cards on my phone wouldn’t work because they don’t account for combinations of things (I’ll need to make some changes to accommodate that going forward). I asked him if he wanted a spoon and he did. Progress, right….wrong. I put the spoon in the bowl and he lost it again. After about 25 minutes I decided to throw a “hail mary” pass and grabbed the bowl from the food processor. As it turns out ALL he wanted was Apple Jacks in the food processor bowl w/ a spoon. Who would think of that? He told me “Thank You” and giggled and off he went…

I don’t really understand what makes Emmett “tick”. I do know he has his reasons and if it provides him some comfort for right now then so be it. Once we gain some ground in the language department this can be handled differently or rather, better. Now if only the rest of today could be this easy….sigh

Sometimes when I'm out of guesses and just can't figure it out, I'll say,"Show me." or "You do it". This often works.