Reality is beginning to set in


In an effort to help spread Autism Awareness, I will be helping those that wish to share their story. 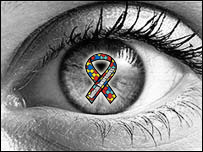 I want to introduce you to Carolyn, mother of two and author of Neurotypical Mom: Life with Z.

Note: I have not edited this in any way. This is Autism through Carolyn’s eyes and in her own words. Please show your support for her courage and visit her blog and add her to your blog roll.

Also if you are interested in sharing your story here, contact me, and I will be happy to help.

This is Carolyn’s Reality Autism

Autism through my eyes…the agony and the ecstasy.

My son Z is adorable, smart, charming, hilarious and sweet and is also hands down the biggest challenge I have ever had in my life to date.  You don’t know me and thus have no idea what a big statement that actually is, so I’ll clue you in.  Since having kids my husband and I have had some interesting times indeed!  As a woman with no mental health issues for the first 30 years of my life, it was shocking when I got postpartum depression after both boys and treatment ended up including 4 hospitalizations, 21 electroconvulsive therapy treatments and a near commitment by the state of Virginia.  Also, after a healthy birth with my first son (from his perspective at least – lol), it was shocking that my second son almost died numerous times from a rare lung disorder, was put on a lung bypass machine, got a brain bleed, acquired hydrocephalus and ultimately had to have a brain shunt put in all by the age of 2 weeks.

Yep, my life sounds like a medical journal gone awry, but honestly, all of that pales in comparison to life with my seven year old aspie.  Z has only been officially diagnosed with Aspergers for 5 months, so it’s only in those last five months that he has actually gotten any real help.  Before that our lives were like a diabolical merry-go-round of tantrums, physical violence, bullying (by others, not Z) and being throw out of school after school after school.

Autism through my eyes is agony and ecstasy.  Z looks and acts so normal for the most part.  People can go through entire conversations with him and never know the extent of his disability.  This should make things easier, but it honestly doesn’t.  The fact that Z is so high-functioning makes him a target for other children.  The fact that he can play with another child normally for a couple minutes (ecstasy – for him because he feels like he has a friend), sets him up for ridicule when he starts to perseverate, act controlling or show some of his (many) sensory issues at some point later in the interaction.  Then we are left with a boy who is so sad and lonely and just can’t understand why he can’t have the friends he so desperately wants (agony).

I’ll give you an example, Z is a genius.  I am not bragging or talking up my kid, just merely stating a fact. He’s been tested, he’s off the charts.  This is the ‘ecstasy’ part.  Z can do great things if he wants to, if I can help him in the right direction. That fact is seriously exciting and cool.  He’s known his letters since 13 months, phonics since age 2 and in November I taught him his times tables (up to 12) in 37 minutes.  He is like a sponge, sucking up information faster than I can present it to him – he surpassed my knowledge level last year I think and now I rely on the internet an awful lot 😉   The flip side (the agony) is that he doesn’t have any friends – NONE.  He’s seven and he’s only ever had playdates set up by me.  More than that, he has never ever had a SECOND playdate.  He usually scares the kid so much on the first one that they don’t come back.  Let’s examine his first playdate when he was 4.  Ryan (the playdatee) walks in to our house, Z opens with, “hey, do you want to count to 1000 by 10s?”  I was like, “seriously Z, that was your best foot forward?”  Ryan was like, “dude, do you have any lego?”  Of course, Z was so set in the idea of counting that he refused to play anything else, yelled at Ryan, tried to kick him and Ryan went home within 15 minutes.  Needless to say Ryan was not interested in a repeat performance.

We moved recently, from North Carolina to Minnesota, because we just couldn’t find the help that we needed down South.  This has made a huge difference in our lives.  Z is now in quite a few special programs both in and out of school that have helped him grow and mature.  This time last year, I was on the verge of a nervous breakdown.  Z was in kindergarden and by January the school was calling 3-4 times a day to tell me all the things that he was doing wrong.  In an typical day, he was averaging 2 visits to the Principal’s office, running away from the classroom at least once and multiple meltdowns.  Then there was the piece de resistance…being physical with other students weekly.  It was terrifying, especially when the school began telling us, ‘We’ve just never seen this kind of behaviour before, we don’t know what’s wrong with him’.  It was all highly disturbing, however, it was Z himself that really spurred us into action.  He came home most days saying, ‘I’m a naughty, naughty boy’ and he was so upset and agitated that he threw multiple tantrums in the 4 hours between school and bedtime.  It was as if his spirit were being crushed and he was not yet 6!!  I would put him in his room to try and calm him down (and keep his younger brother safe from his rages) and would have to hold the door closed because otherwise he wouldn’t stay in, thus defeating the purpose of the exercise.  Most days he would scream and throw his body against the door over and over as I sat on the other side holding the handle with tears streaming down my face.  After 45 minutes he would usually fall asleep and I would breath a sigh of relief.  It was over, for now, but the anxiety never really went away because we knew it would start all over again the next day.  Back in those days, life was much more on the agony side and very little ecstasy.

Now we are in a very different place, it’s not ecstasy all of the time, but then again when is it ever?  The programs in Minnesota have helped Z tremendously.  I am so profoundly grateful.  There are still tantrums, blowouts, aggression and certainly days when I put Z to bed, walk straight into my room and bawl my eyes out (like the time that a stranger at the park told me that ‘being on the spectrum wasn’t an excuse to not teach my child manners’), but they are much fewer than they used to be.  In other words, less agony, more ecstasy.  That’s the best we can hope for, maybe even the best that anyone can ever ask?  Z’s Aspergers will never go away, never be cured, he will never be ‘like everyone else’, but if our lives continue to be less agony and more ecstasy, it will be worth it.  I can live with that.

If you liked this article, please visit me at neurotypicalmom.com

I cried a lot after reading this article . because I have similar problems with my first son . and no one can understand!!!!
thanks Rob for introducing Carolyn to us.
thanks Carolyn to describe your feelings (my feelings) in better way than I do.

She\’s pretty incredible isn\’t she. I want to help everyone I can. It shows the many many sides to Autism. Thank you