We’re on a victory roll

While this may not seem like a big deal to many people but I assure you it’s a big deal for the Lost and Tired family. We have been struggling for a very long time with getting the kids to try new foods. They don’t stray very far from chicken nuggets and dry Ramon Noodles.

What is it with dry Ramon Noodles and Autism?

Elliott and Emmett in particular are extremely picky eaters. They don’t like thw texture of many foods. For some reason out of the blue, Elliott asked for a turkey sandwich. Typically, when Elliott says he wants to try something, he backs out at the last minute and decides he doesn’t want to try it.

I wasn’t holding out hope but I had to go to the store anyway so I picked up some sliced turkey breast. Turns out that Elliott loves it. Now Emmett is one that will never be out done by anyone so he decided he wanted some as well. Emmett typically only likes chicken nuggets and Ramon Noodles.

However, to my surprise Emmett inhaled the turkey and wanted more and more. While we would normally try to portion things out, Emmett never trys new foods so we figured, what the heck and let him go. There are far worse things he could be eating and it’s better then dry Ramon Noodles.

I’m counting this as a victory for them both and honestly for us as well.

Just thought I would share. Sometimes with Autism, the little ripples can lead to much bigger waves. In this case victory was washed up upon our shore and in the Lost and Tired family, we welcome ANY victory, no matter the size, with open arms.

That is one of the lessons Autism has taught us very early on. 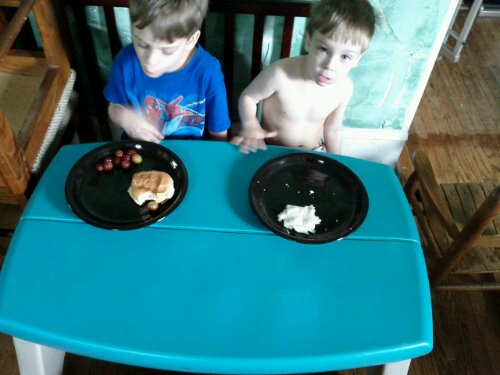 They like Ramen noodles because they're awesome and delicious. LOL Congrats on the new food diversity in your house! hehe

Massive victory! Playing in swings may seem like an abstract concept but here Emmett is really reaping the benefits 🙂 I actually relate to this on a personal level, my SPD mostly affects my eating habits although it did improve a bit as I got older..pity they didn't have OT when I was a kid!

I hear you! My son has only a few things that he will eat and then the next day he won't even touch something that he absolutely loved the day before! He also does the thing where he absolutely has to have something and then refuses to eat it. Celebrate away!!! That's a huge victory!!!!!!!!!!!!!!!!!!
My recent post I really need to stop saying, &quot;Everything's going well.&quot;