The High Cost of Bolting -

Emmett had a great 1st day of pre-preschool

The High Cost of Bolting

The following is a guest post by Jeff Stimpson. I’m very excited that Jeff his sharing this post here on Lost and Tired.

Jeff Stimpson is a native of Bangor, Maine, and lives in New York with his wife Jill and two sons. He is the author of Alex: The Fathering of a Preemie and Alex the Boy: Episodes From a Family’s Life With Autism (both available on Amazon). He maintains a blog about his family at jeffslife.tripod.com/alextheboy, and is a frequent contributor to various sites and publications on special-needs parenting, such as Autism-Asperger’s Digest, Autism Spectrum News, Fatherville.com, and The Autism Society news blog.

The High Cost of Bolting

My son Alex (13, PDD-NOS) wasn’t supposed to come home on the school bus at 4:30 on Friday afternoon. He was supposed to have come home around 6 or 6:30, entertained for two additional hours by new people at an afterschool program. I filled the paperwork out months ago. The bus would’ve picked him up at school at 3, taken him to the program, brought him home. New stuff for a boy nearing age 13, home peace for a dad nearing age 50. I can’t believe these programs are still free!

On the afterschool application, however, under “Anything Special We Should Know About Your Child”, I wrote “may bolt.”

“I appreciate your honesty,” the lady at the program was soon on my phone to say. “You have to understand that we have four counselors and 21 children…”

Alex wasn’t supposed to be with me here at home on this Saturday night, either. He was supposed to be at overnight respite, which would’ve kept my boy occupied and entertained by new people until I went to pick him up.

Alex spent Saturday night with me.

“Com-PU-ter!!” he said on Saturday night.

“Alex don’t carry it around like that!” I’ve already had to replace it once.

He tried the respite folks for an afternoon a week ago. They called me early that day to come pick him up. “So, is he ready for overnight respite?” I asked when I got there, in the same tone as I might have asked, “So, who won World War II?” They wagged their heads. They look like a fine crew (“He’s very verbal!” one staffer said), and they want to work with Alex gradually to get him “respite ready.” I like that phrase. But while at overnight respite for even a few hours, he ran away and didn’t always listen.

This respite of mine is going to take work and time. Everything with Alex, everything, from the moment he arrived in this world of battle and blood, has taken work and time.

Alex has his supporters, people who’ve have known him since he was a toddler on a rocking horse, an oxygen cannula he needed to breathe then snapping behind him. Long before now, when he’s four-ten and weighs eighty pounds. “What do they mean he’s not ready? That’s what Alex does: he explores,” said his longtime res-hab worker. “What’d they think? That somebody would come from home and love it immediately?” said my wife Jill. “It’s just like when he first came here. He has to get used to the place,” said Uncle Rob. The respite folks know this, and will work with us. But Saturday night he was with me. How many programs will slam their doors at the word “bolting?”

I’ll fudge the applications and damn the early calls. I’ll change how I launch Alex to programs, going with him for a time or two and helping him settle in – no more bus the first day and handle the tears later. Seems these days the four-foot-ten young man makes dad pay for his respite.

If you want to read more about Jeff’s life check out his blog.

If you still can’t get enough, check out his 2 books. They both have great reviews. 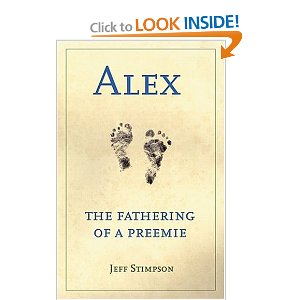 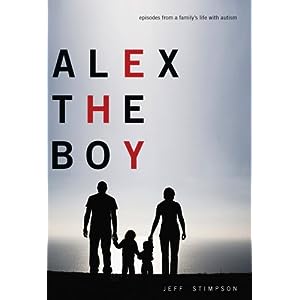