Lizze sees her PCP this morning

I have mentioned on at least a few occasions,  how Autism can complicate just about every situation imaginable. Please keep in mind that I’m speaking only from my own personal experience.  I don’t believe in telling others how to think or feel. Instead I just share my personal experience and knowledge.

Emmett just had surgery on Wednesday morning and came home Thursday afternoon.  We went through the same discharge summary that anyone else having a child that had just undergone surgery to remove their tonsils and adenoids would have heard. The only difference being that Emmett is not like most other children.
Emmett has Autism and Autism has a nasty little habit of making things more complicated….at least in my experience.

We are dealing with that right now. During Emmett’s 2 week recovery he is on what is essentially a liquid diet. This is not going over very well. Emmett’s diet is already pretty restricted due to food allergies and much of the liquid or soft food diet is not possible. The reason for that is because he is either allergic to it or can’t tolerate the texture due to sensory issues.

I have heard from many other parents and they say there child is the same way with food.  So it appears to be a common problem amongst kids on the spectrum.

It would be hard enough for any kid to go through this type of diet change but when you factor in Autism, along with special dietary, developmental and sensory needs it gets really complicated.

Emmett is already difficult to feed because of sensory related issues.  His food has to be a certain color,  texture,  temperature and served only on certain color dishes.  Nothing can mix and typically different types of food have to be on different plates.

When we deviate from this he will refuse to eat.  So having to drastically change his diet doesn’t go over very well.  He can’t drink his favorite milk and he can’t eat his chicken nuggets either.

While it may not seem like a huge deal,  to Emmett it’s a significant event in his life and creates a great deal of anxiety.

I had to go shopping again today and I just went shopping a few days ago. I needed to stock up on all the things that Emmett can and will, hopefully eat over the next 2 weeks. So far, the jello and coconut milk ice cream are the only things he has been willing to touch. Because his throat hurts so badly he associates eating or drinking with pain, so getting him to do either is difficult.

Another huge complication that Autism brings to the table is the speech and language delays.  While Emmett has made great strides in his speech and language abilities,  we have a long way to go.  His expressive language is sorely lacking.  Expressive language is the part of communication where Emmett can express things like, how he’s feeling, frustrations,  pain ect…. Emmett can’t just come out and say something like,  my head hurts or my tummy’s upset.

The types of things that Autism Spectrum Disorder impacts with Emmett, makes many already difficult situations all that much more difficult. This due to Autism’s impact on overall communication and sensory perception.  We experience this quite often when it comes to our boys,  especially Emmett and Gavin.

What types of things do you experience when it comes to the complications associated with Autism? 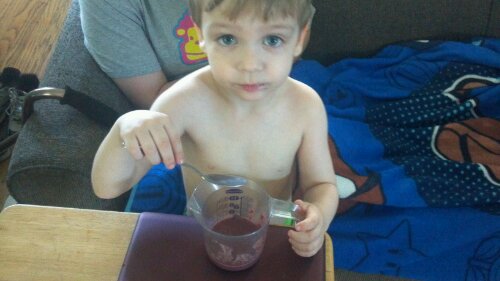 I sympathize with Emmett on the liquid/soft food diet–I don't have food allergies, but when I was younger my food sensitivities were pretty extreme. Every time I got my braces tightened or adjusted, and also when I had my wisdom teeth out, it essentially meant not eating for a few days to a week, because nothing available was tolerable for one reason or another. Hang in there, Emmett!

I'm reading my story verbatim and went through the exact problems with Michael's T&A. He also had an accident where he bit through his tongue, The ER dr gave me a very hard time (complaining) with the examination because he did not understand Michael's autism related actions. It took 4 people to hold him down so the dr could examine him. The dr was downright unprofessional and irritable even after our explanation. We had to admit Michael twice for after for IV fluid and food because he refused to eat because his tongue hurt. so bad. The one common exhaustive thread through every experience is how life comes to a screaming halt as we deal with yet another crisis. I am not complaining, I just wish the world did not have to make it so hard on us (ie the dr who gave us a hard time – it's not like we gave the kid a nickle and said make it very tough!)

Very nice to meet you. I completely understand. Fortunately, Akron Children\’s Hospital was very good with Emmett and seen to know their way around kids with Autism.

We have however, had the opposite experience on more then one occasion. It\’s frustrating because they are the doctor and they should know more about Autism then we do. Sadly that\’s not the case.

Hang in there. We are on the same roller coaster. 😉