Got my first call school

The view from therapy

Got my first call school


Well, the ice has been broken and first time out of the way. I was hoping to make it a bit farther this year before getting this started but…whatever..

I received a call from Elliott’s school that I needed to come get him. When I arrived in the school office a few minutes later, I was met by the year filled eyes of my sweet little Elliott Richard.

He was very clearly not feeling well.

I got him in his pajamas and into bed. He took his Tylenol and sipped his Gatorade.

I put on Pokemon and snuggled with him for a few minutes until he was asleep. Hopefully, this is just a fluke and not the beginning of an illness filled Fall season for him.

Currently, Emmett is recovering from surgery and at the beginning of another fever flare up. Lizze is down for a multitude of reasons. She’s sick for one and stuck with never ending migraine as well as in the middle of a very painful fibro flare. Mr. Elliott Richard is home with a fever as well.

All I can say is, at least the week is halfway over. 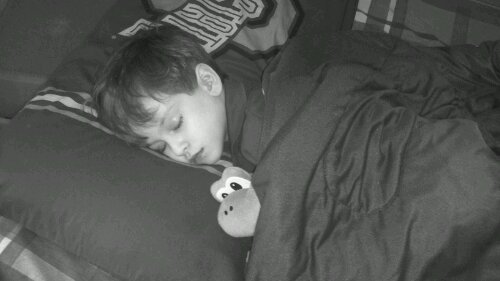 love and hugs to you all, and for goodness sake you need some sleep too!

I hope he gets better soon and life finally calms down for you all!