A house full of sickies


Emmett and Elliott are both sick,  either again or still…not sure which. Elliott has developed the cough that Emmett has had.  Emmett’s cough has gotten a little worse.

Lizze had an appointment with the neurologist,  who then sent her to another unplanned appointment.

My job this morning was taking care of my little sickies.  Despite the battles this morning,  they finally settled into some quite time on the couch using their Android4Autism devices. Elliott actually prefers this to his DSi anymore.

It’s the one thing they agreed on this morning. Well they also agreed on watching Sid the science kid.  I’ll take what I can get..  Little victories.  Plus they are so adorable…. 😉

I want to thank Scotty Brown from Android Activist for catching the typo. Apparently when I typed ‘peas” it autocorrected to “pees”…….  Thanks for pointing that out.

I also highlighted my disclaimer at the bottom. I already blame everything on autocorrect… 🙂 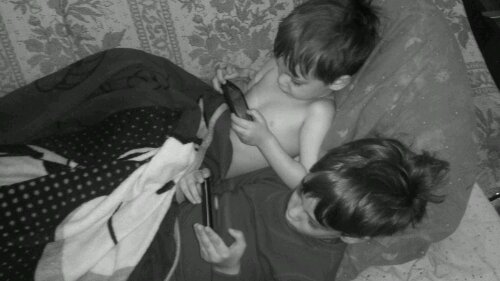