I was making dinner and finishing up some dishes.  I had a pot of water boiling on the stove and had the box of pasta sitting on the table in the kitchen along side the jar of sauce.

I turned around because I thought I had heard something.  Everything seemed fine so I finished up what I was doing.

When the water was sufficiently boiling I went to add the pasta only to find it was missing.

I went crazy (I know…hard to believe) looking for it.  I would have sworn that I had set it on the table but clearly I was mistaken…or was I?

As I’m looking through the pantry trying to find the elusive box of pasta,  I heard something.  It was faint at first and then grew louder with each passing second.

I come to find my little one all comfy on the couch giggling with his blanket and munching on the uncooked pasta that he had helped himself to,  as though it were popcorn.

You know something?  It’s times like these that really form the amazing memories I will treasure my entire life. As frustrated as I was that I couldn’t find at the time,  what I thought I needed,  Emmett managed to show me what I actually needed…a bit of laughter and a smile….

Sometimes we just need to slow down a little bit and own our kids lead.  Whether it’s looking for a missing box of pasta or going over the Daddy-Do List you just received from your 5 year old,  these will be the precious moments you will carry with you.. 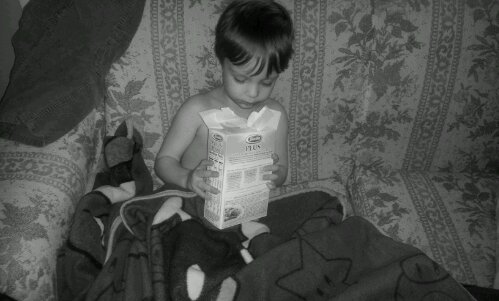