At age 3 and approaching age 4, Emmett still doesn’t tolerate clothes most of the time.  OT has been working hard to help with this and we have seen some improvement.

For example,  shoes and socks aren’t as difficult for him anymore.  He’ll take them off the second he gets the chance but he tolerates them much better now.

Clothes on the other hand are a different story.

He has started wearing pajamas more often and that’s a rather big accomplishment.  You may not even recognize him in the picture below because he’s actually wearing pants.  He’s wearing pants and some hat thingy that Elliott made at school.

While some people may think,  whoopy he’s wearing pants,  big deal.  Well,  it’s a pretty freaking big deal,  because he never wears clothes.  Anytime he does is considered a step forward.

I know most of you out there get what I’m saying.  🙂 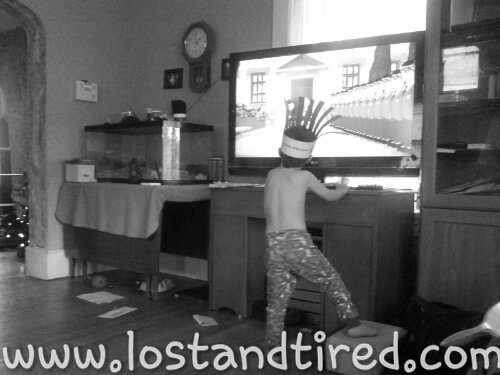 Posted from WordPress for Android so please forgive the typos. Auto-correct and I don’t get along very well.