I’ve heard of brown nosing but…


As the title states,  I’ve heard of brown nosing before,  I’m sure we all have.  However,  in the long standing tradition of the Lost and Tired family,  my kids don’t do anything by the books.

Elliott,  not content to simply be the typical brown noser,  decided to rise above the common title of brown noser and all together change the color.

You’ve all heard of having a green thumb. Well, Elliott, in keeping with that particular color scheme,  has become the green noser.  🙂

In reality,  while his nose is green,  it got that way from a giant sucker he had been working on for a little while.  To be honest,  it looks a lot like clown paint.

It was just cute picture and so I thought I would share it with all of you….   🙂 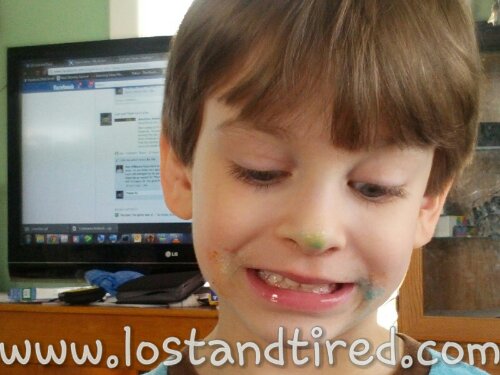 Looks like Elliott was showing off the Irish in him for St. Patrick's day! How cute he is!