I’m a good parent because…..


Well,  Gavin survived the biopsies.  This is what actually happened.  First of all,  the doctor was absolutely fantastic and turned out to be the same guy that did his lumbar puncture last year.

Basically,  the entire process took about 45 minutes. Gavin was in full dramatic form while we were there but did pretty well overall.  🙂

They took a total of 3 biopsies all together.  Our extensive from his upper leg,  le from his thigh and one from his ankle.

Prior to doing anything,  Gavin received one shot of lidocaine in each of the three sites.

He freaked out over the lidocaine injections but most of it, as I said, most of it was drama.

The way they take the biopsies is a bit under pleasant but at least he didn’t feel anything.  The only way I can describe it is that the device they used is very similar to a pencil that is missing the eraser. Although what they used is a bit smaller in diameter than the eraserless pencil. 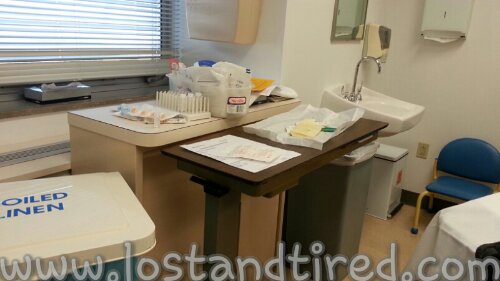 All he did was twist the razor sharp barrel into the site and remove a circular chunk of skin.  That’s it.  The process was repeated 3 time and the slightly smaller than an eraser sized hole was butterflied shut.

Gavin never even flinched for this part. 🙂 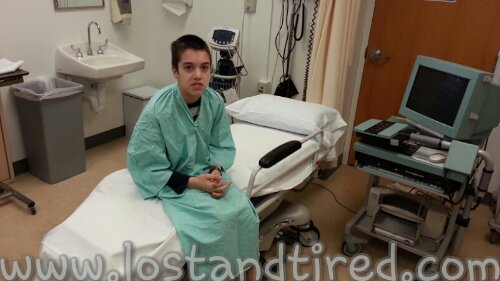 Elliott left the Hamptons about 10:30am this morning. They will be at my grandmother’s house sometime around 9pm. From there,  it’s about an hour and a half drive home.

I'm glad to hear Gavin handled the procedure so well. It sounds scary. I am sorry no root cause for the dysautonomia has been found yet. That's so tough to hear. Please don't give up searching for answers.
Have you checked yet to see if he has an MFTHR deletion? If the test didn't cover it that is a place to start. Also, if you go to this PANDAS website, there should be a whole list of infectious diseases linked to autoimmune neurological conditions (including PANDAS) you can test for.&nbsp ;http://pandasnetwork.org/diagnostic-tests/diagnostic-tests/
Go under immunological workup.  I also have a very good neurologist I can refer you to that loves to take on challenging cases and can consult with you and Gavin's doctors over the phone (or in person too of course). He is very good at looking for root causes of neurological problems and is also a PANDAS and PANS/PITAND specialist. Several friends I have with PANDAS and PITAND kids and our neurologist have used him and he is very good. Dr. Trifiletti successfully several of those teenager girls out in LeRoy, NY about 6-9 months ago that were part of a cluster who came down with tics and strange behaviors.

Sorry, he treated those girls out in LeRoy, NY. They are doing much better from what I hear.

@rmagliozzi they have tested for everything conceivable. Also, was that book from you? If so, thank you. 🙂

@lostandtired  @rmagliozzi No, I haven't sent you a book yet.  Hope you enjoy it though. Sounds like you have left no rock unturned.  Gavin is the most puzzling medical case I have ever heard of.

@rmagliozzi I can't remember who sent this. Hmmm

My oldest girl had that kind of biopsy when they were confirming her dermatomyositis diagnosis–it was the LEAST painful thing they did to her that day.  They did an EMG–Electromyogram–where they insert needles into muscles and then run an electric current through the needle into the muscle and record the strength of the contraction–which is VERY painful.  Then they gave her gamma globulin injections and an 8 hr infusion of immunoglobulin.  We spent over 15 hours at Duke children's hospital.  I so empathize with you and your family's ordeal!  Hugs and prayers from Virginia.

@Batty sounds like your daughter  had the day from hell. What a tough girl she is!

@rmagliozzi She is one tough cookie filled with fluff and goo.  She loves romance and Romance, Jane Austen and Nathaniel Hawthorne.  She is sick 4/7 days of almost every week.  She does homework for hours and hours, struggling with a B brain wanting to be a straight A student.  She gets A's most of the time because she refuses to give in to fatigue, pain, or pessimism.  She's my girl just as her sister is my girl, too.

@Batty @rmagliozzi what a champion..

@rmagliozzi @Batty yes she does. 🙂

@Batty my wife had the same test done. It was unpleasant.

To me, there is nothing more exhausting than medical appointments. The waiting is stressful, the experience is stressful, not knowing things and then waiting for results is stressful…the fact that you maintain your sanity doing this day after day after day is beyond impressive! Congratulations for another jumping another hurdle with flying colors! You too, Gavin!

@hudginsvicky you can say that again.