I wanted to update everyone as to how Gavin has been doing the past few days.  There are two areas of major concern when it comes to my oldest son.  The first being his enormously complicated health problems and the second being his equally complicated mental health challenges.

As far as the health side of things go,  he’s been relatively stable for the past few days.

We have had periods of heart rates ranging from bradycardic to tachycardic and chest pain ranging from minor to more severe. Nothing was significant enough to warrant a trip to the hospital, so that’s good.

On the other hand we have the behavioral side of things,  and that’s a rather mixed bag.

For the past day or so,  we have been tantrum free.  Gavin did greeting at yesterday’s infusion, despite being faced with frustration. 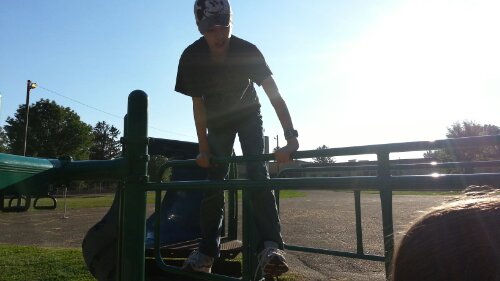 We also haven’t seen a great deal of manipulation as we typically do.  Everyday is difficult and we have to keep things moving forward, but Gavin has been doing pretty darn well, at least as far as the last few days are concerned.

I read another parent's blog that their child often had good behavior right after having IVIG infusions as well. They could usually tell the child was due for another when their behavior was way out of control. I'm glad to hear he is stabilized for now. I hope that last for a good long time.

I'm curious about your reaction to the theory of autism put forward by Temple Grandin (and perhaps developed on herself) that says that autism involves the inability to synthesize information from the different sensory inputs.  She formulates a different level of consciousness for autistic people with much less ability to introspect about their own internal states than NT people.  It struck me that Gavin might be well described by this.  You have mentioned a couple of times that he doesn't know or doesn't remember doing things or why he does things — which would fit perfectly with the inability to introspect aspect of what she is describing.  Do you know this theory and have any thoughts on it?

I'm curios what happens when Gavin has a good day? Does he even know the differences in his behavior? Can you make a big deal about positive behaviors or does that throw him off? You are certainly in a quandary, but I'm always glad To hear when there are good moments.