How often do you see this?

Elliott has officially begun medication to weed out his ADHD symptoms.  We are about 8 hours in and so far so good.  ADHD medications are very fast acting meaning that they begin working almost immediately.

It looks as though Elliott may have ADHD.  We have noticed a pretty significant change since this morning. 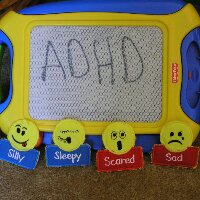 He’s still anxious and full of worry, which is to be expected since we haven’t gotten to the anxiety yet.

However, he’s much calmer.  I keep asking him if he’s alright because I’m so used to him literally bouncing off of everything in sight.

Instead, he’s actually just sitting down and even using his walking feet.

Our doctor explained to us that if it’s going to work, we’ll see a significant change the first day.  At this point in the game, I would say that we have seen the improvements.  Although, I would like to see this over the next couple of days.

We report back to the doctor on Monday and let him known what we saw.

I hate the idea of him being on medication but if it helps him to improve the quality of his life, than so be it.

Today’s dose should be wearing off pretty soon and I’m hoping that we see a change because that would be a great indicator that the meds work for him.

Go check out the books 'Driven to distraction' and 'Delivered from distraction'. They cover the ways ADD can manifest differently in people and they give a very nice analogy. Having ADD is like being nearsighted. Medication for ADD is like having glasses but for your brain. It helps your brain focus in on things the way it's supposed to be able to. I'm glad you guys are having success with it. I'm starting to wonder if my own anxiety could be caused by my ADD symptoms as well.. I have the whole slew of the innattentive type and part of the hyperactive too.

@Silachan that is a really good analogy. Thank you for share that. 🙂

@KarenRobiscoe hello how r u