23 IVIG infusions down and a lifetime to go

We had a close call

23 IVIG infusions down and a lifetime to go

Depending on how Lizze is feeling in the morning, she may be taking him for his infusion.

It’s easier for her to take Gavin than it would be for her to stay home the ever energetic, Mr. Emmett John. 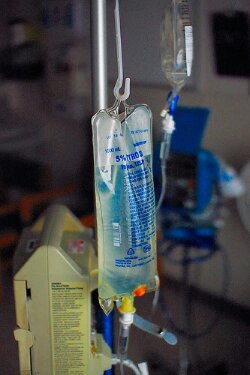 It’s really hard to believe that it’s been almost 2 years on this immunological journey. It’s been a long road.  A road that was at times, quite scary. It’s a lot for a kid to have to cope with and for the most part, Gavin does really, really well.

We have the typical issues of him being demanding to the staff or at times, downright disrespectful.

Overall, I’m really proud of him because I can’t imagine having to do this each and every month.

For those that are aware, Gavin receives IVIG infusions every month because his body doesn’t produce enough.  What he does produce on his own, is defunct.  This basically, means that Gavin has a significantly compromised immune system.

Ironically, he has never really been a sick kid.  I mean he had ear infections and that sorta thing but never anything serious.

That’s a miracle, considering.  Nevertheless, we are very grateful for that miracle.  🙂

We actually found this whole thing out on accident.

Gavin’s gastrointerologist ran a blood panel testing for certain foods allergies and that how we found out.  We were completely caught off guard. He had gone 11 years without anyone picking up on this and never getting seriously ill.

We have Akron Children’s Hospital to thank for not only discovering this but taking such good care of him over the past 2 years.

I can’t say enough about Akron Children’s Hospital. They are simply amazing and I don’t think there is another way to describe them.

I feel like we should have a little celebration for Gavin’s 2 year anniversary next month.  Maybe a cake or something.  To me, this is a pretty big deal and should be celebrated.  Especially considering that this all takes place in oncology.  Every single month, we realize just how much worse it could really be.

If you ever need perspective in you life, volunteer in a children’s oncology ward.  I promise, it really does put things into perspective.

My son has had serious health issues all his life. I finally got him an immunologist referral and found out his immune system isn’t doing its job and his levels are low. We are trying to avoid going that route by trying oral preventive antibiotics everyday for the next several months to see if it helps. If not we will be right where you are and honestly it scares me. Any advise?

@TheraNicholeLedet has your son been tested for any type of immunodeficienc ? That would be the best place to start, in my opinion anyway. A pediatric immunologist is where to go. Try your closest children’s hospital. Also, it’s not uncommon for kids to be on antibiotics like you mentioned. It scares me as well though. Please let me know how I can help.

@lostandtired he is seeing one and was tested. They don’t know for sure why is levels are low. His immunologist started him on the antibiotics. He goes back Thursday for a check up and to possibly switch the antibiotic. He is still sick even after a month on them. He has strep and the stomach flu at the same time. The dr said we are going to try the meds for 3-4 months and if it doesn’t help keep him well then we will have to do monthly or weekly transfusions. This scares me to no end. My son just turned 8. Any advise you have would be greatly appreciated. Someone mentioned PANDAS to me and I am going to talk to his dr about it. I hate not knowing what’s going on with my son. His medical history and medication list read like a medical txt book.

@TheraNicholeLedet trust me, I understand. Gavin’s records are over 12″ thick. Did they mean infusion and not transfusion. Those are two very different things.

@lostandtired I am almost positive they said transfusion. Replace the platelets is what they said. I’m new to this whole thing and I’m lost and scared. First was asthma and insect allergies then autism/ADHD/bipolar, then seizures now this along with a whole other list of stuff wrong with him. I am glad to know what’s wrong but at some point you are like why my child? I am a single mom with no help and I feel like I’m drowning.

@TheraNicholeLedet  @lostandtired Let’s move this discussion to the forums. I just set up a forum dedicated to this very topic. Follow the link and sign up. You can sign in with facebook as well if you like. Let me know if you have any problems.
I want to try to help create a dialog so that we can find you some answers. 🙂

@TheraNicholeLedet  @lostandtired I have two children with PANDAS, one with autism (and a million allergies!). It sounds like your son may have it. PANDAS presents as a slew of mental disorders and neurological conditions, including the autism/ADHD/bipolar, and much more. I recommend you test for other illnesses too, like mycoplasma, lyme and all those 10 herpes viruses. I am in a PANDAS support group and so many of our kids are sick with more than strep. At least one also has mold illness on top of it all- also got lyme disease and parasites (she’s got dysautonomia, POTS,  thyroid disease and PANDAS). Many have immune deficiencies as well. If you want to join our online group on Facebook, let me know. It helped so much and got me to the best doc for my boys.

@TheraNicholeLedet  @rmagliozzi You can look me up under my name, Rebecca Magliozzi. Send me a message (might have to do a friend request first. Not sure how facebook works. I will get you an invite to our PANDAS group.