I have a suggestion for you.  Instead of spending millions of dollars on your angulation celebration, after spending $1 billion on your campaign, why not do something for the people. 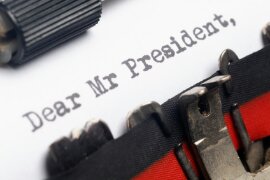 I challenge you to go simple on your celebration. We all know you were reelected, do we really need to waste all that money on a party to celebrate that.

Your job is to lead our country.  Like any good leader, shouldn’t you lead by example?

I’m a special needs parent to 3 boys on the #Autism spectrum and trust me when I say that life in not easy for families like mine.  Honestly, I think life is rough for much of the country.  Don’t you feel guilty about considering such a lavish celebration for yourself?

I feel guilty doing anything for myself, especially when things are so challenging at home. I think that many parents feel the same way.

Could I ask that before you dump millions of dollars into your party, which you have rightfully earned, perhaps consider that as the leader of the free world, you should be feeling the crunch as well.

I would love to see something positive happen with all that money.  Maybe you could redirect those funds to #Autism research or maybe to social programs that help families, truly in need.

We have soldiers and their families going without and maybe you could do something to help them. I mean if anyone deserves it, it’s the military families. Without them, we wouldn’t be safe.

Maybe you could use the money to help some of our impoverished schools. After all, these kids are our futures. That would be a sound investment.

I would also ask that maybe some of the elected officials, who likely make much more than the people they are supposed to represent, take a pay cut. Anyone could spend months or years trying to make a decision when truthfully, it doesn’t affect them.

Look, I could go on forever, but I won’t.

Admittedly, I’m not a fan of your policies or the way your running this country.  However, I do respect the office you hold.  Perhaps, doing something like what I’ve suggested, could earn you my respect.

I know that my respect probably isn’t worth much to you but it’s all I have to offer.

I would suspect that by doing something for those in need, you would earn the respect of countless others as well.  You could also know that you have made a difference in someone’s life. That sir, is priceless.

I don’t expect to hear back from you or anyone else but I just wanted to speak my mind.  I see so many parents and families suffering and I honestly get angry when I read about things that I consider frivolous, receiving so much money.

Think of all the therapy those funds could cover for kids like mine and many others that desperately need therapy but can’t afford it. Again, just a thought.

Thank you and congratulations.

Who Pays For Inauguration Festivities?

Other than the swearing-in ceremony, events and festivities associated with a presidential inauguration are not government functions and are not paid for with taxpayer money. Presidential inaugural committees raise money from private donors to hold these events.
—–

Granted, your larger point is that the government should spend less on itself and more on families and education.   Which is a fair point.   However, given you have those priorities, I find it rather odd that you vote Republican.   Autism research?   The Republicans in congress have been trying to cut the NIH research budget for a decade.  Obama feeling guilty for not giving more money away?  He gave away 14% of his income in 2010 — more than any other candidate for president this year.  EducatIon?  Slashed by Republicans, funded by Dems.  Healthcare for the poor?   Look no further than the Republican's own platform vs Obamacare.  Pay cuts for congresspeople?  Obama froze government workers salaries in 2009 and they remained frozen until next March.

President Obama's policies are aimed at supporting the people of this country, not the corporations and already-powerful capitalists.   For that defense of families, of real people, of the poor and sick and financially-stressed, he has earned my respect and admiration.

@dotdash you make good points. I didn't vote for him because of many reasons. One of which, I don't feel that he's handling things like Iran and now Iraq in a manner that keeps the country safe. These are a lot of concerning things surrounding the us ambassadors assassination and how it was handled.
To me, if my family is not safe, than what does anything else matter.
I'm also not a fan of Obamacare. Most of the country, from what I understand is apposed to it. It's going to significantly impact businesses.
You make valid points and I thank you for educating me. However, for me personally, there are other issues that weigh heavier on me. Hopefully, this turns out to be a productive 4 years and Mr. Obama can unite an otherwise divided country.

@lostandtired  @dotdash It is always fine to agree to disagree.

@dotdash I always learn something from our little political debates. 🙂

@lostandtired
(please excuse my
run-ons, errors to spelling, and punctuation)
Granted, Bush Jr is credited for NCLB, but failed in adequately educating/informing the public, active/consistant monitoring, enforcing compliance/accountability. The majority of non-disabled Americans still believe that NCLB lowers standards for disabled students and adversely affects the learning potential of their non-disabled peers.
Our nation's recession was not conceived under President Obama, it was inherited as a result his predecessor's two terms in office.
Public television, cable access, the media, and world wide web regularly provide live broadcasts of President Obama asserting his power in order to ensure and improve the laws that protect the health/well-being, potential, progress, achivement, inclusion, understanding, and acceptance for all disabled Americans, their families, and peers. His charge is for all of us to have the opportunities, resources, and desire to realize our potential.
No President personally funds/pays/finances their campaign or inaugural celebrations. Nor does any President have a say in how the campaign and inaugural monies are spent. The providers/donors/supporters decide and delegate the finances. Plus, our country has a system of "checks and balances", meaning the President doesn't get to do what he wants, that would make him a dictator.
President Obama openly admits his ability and willingness to pay significantly more in taxes and has called upon those w/ comparable incomes, and higher to do the same + he openly implores Congress and the House for their support in changing the laws. Shamefully, his efforts are rejected at every turn.
My local school district constantly gripes about the lack of funds to pay educators, staff, transportation, core curriculum standards, required programs, extracurriculars, technology, gifted, atheletics, Arts, SPED, continued education/training, etc…Guess what? They're lying, they can afford it all, including annual salary increases, charitable donations/grants/scholarships, specialists/therapists, new hires, etc…the proof is easy to locate as it is Public Record.
Remember, the President is employed by the people. Perhaps you might consider expressing your point of view and/or suggestions locally. First access and research the Public Records (ie:financial, audits, etc…) for your school(s)/district, community, city/township, county, district, state departments, and elected officials. Get yourself sincerely informed so your views and ideas have merit, intelligently conveyed, and properly addressed.
You will be shocked, sickened, and enraged at tha baltan misuse of funds, witholding of info, frivolous/fraudulent spending, questionable management of records, etc…

@lostandtired  @dotdash Actually about equal number of people support ObamaCare that oppose it.     Fox News may have reported otherwise, but every other source has reported that it is about an equal split with the vast majority being neutral to some degree or another.However, I didn't agree with either candidate on their foreign policy.  Personally, I think we should get out of the middle east.Iran really poses no threat to us as they are not even close to building a nuclear weapon, and even if they did, they have no way to deliver it beyond Iraq or Afghanistan.  Their current missile systems are incapable of carrying a nuclear warhead. However by our hard-line approach we are intimidating them, and they eventually will, or someone who supports them will. Likewise our current method of fighting terrorism is ineffective, it only inspires more terrorists.  We should simply cut our losses and come home.    We don't need to be the police for the rest of the world. As of the ambassadors.  Congress denied the security funding that was needed to protect them.   Our current foreign policy has simply incited the middle east.   We need to simply step back.   We don't need to apologize for the statements of our extremists (and we haven't) but we do need to put them in perspective for the rest of the world (which we also haven't.) However, I blame 99% of the mess in this country on Congress right now.  Their failure to reverse Citizens United, their failure to provide for the basic functionality of government, and their constant bickering, are all indicator of where to start looking for the real problem.   It is congress and the lobbyists who have them in their pocket.These massive failures are on behalf of the entire government, not just the White House.  Frankly, I don't see either side as helping as much as the could.

Why do some people not support Obama care
I'm from Canada so I truly don't know. My assumption is its a good thing for lower and middle class people.

@Jodi p I was waiting in case anyone who doesn't support Obamacare wanted to answer before I jumped in.  My belief (which may be wrong) is that some people are suspicious of the government's right to force everyone to carry health insurance — an individual liberty issue.  Also (but maybe a lesser factor?) is that people don't want to have to pay for the healthcare of other less fortunate people (the government is going to subsidize the policies of those who can't afford to buy their own).  That's the regular anti-tax, anti-social service grousing you get from the right.  A third group of people believe that Obamacare just empowers insurance companies and that the government should go all the way and just provide healthcare for everyone, as in the Canadian system.  Those last people are on the left of the current plan, but they mostly are for the plan, just unhappy with it as a solution.  Others should feel free to add their opinions…

@dotdash @Jodi p my concern is that this was passed without putting it before the people. Obama wasn't reelected because they like his healthcare plan.
I'm all for covering the American people however, this is going to hit businesses pretty hard. I realize that someone in my position should be an Obama supporter. However, I'm looking at the bigger picture. If the economy collapses what good does obamacare do if he hit a recession or worse a depression.