Holding up the wall -

Why I’m saying GOODBYE to @Sprint

Holding up the wall

As you may recall, Emmett is no longer in OT or Speech therapy. We have had to try and come up with things we can do at home, that will help him in these areas.

Yesterday, I couldn’t get him to settle down. He was completely overstimulated from Gavin’s visit and was literally bouncing off of everyone and everything.

Out of desperation I was like, Emmett I need you to hold the wall up for me buddy.

I had him pushing against the wall as hard as he could.  Wouldn’t you know it, it helped.

After Lizze got home, she reminded me that his OT had suggested something like that as well.  She said we could have him push against the wall and get some sensory feedback.  We could also have him sit on the floor and try and push the floor down with his hands as hard as he can.

I just sorta thought it was cute because he was really doing his best to move the wall back in place.

After a few minutes he looked at me like I was crazy, which is probably debatable at this point,  and said, Daddy you were teasing me, the wall never moved. If I let go, nothing happens.

I just looked at him and asked what I always do when he says something that most 4 year olds would never say.  I asked him how he got so smart? He just smiled and ran off to reek further destruction upon the house.

I replied to his smile by telling him that I loved him…..As he was running away, he said I know Daddy….. . 🙂

Oddly enough, these are amazing moments for me as a father.  I truly appreciate how my 4 year old, who couldn’t talk can say something we’ll beyond his years. I also feel really good that he knows just how much I love him. 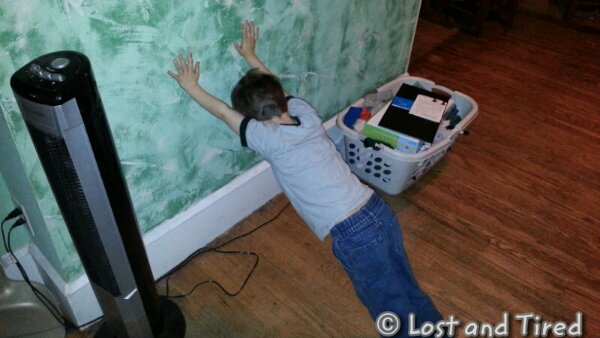 Check out Angie Voss’s books and Facebook pages. She’s and. awesome OT who concentrates on SPD and has great ideas for at home sensory diets. She explains the sensory processing world so well.

Push-ups give good sensory feedback, especially if you have him do it with one foot in the air (takes practice, but it works on balance, strength and focus).  He can also do a pushup where he walks his feet up the wall while his hands stay on the ground and then try a push-up that way.  If you can, purchase a pull-up bar that you can put in a doorframe and have see how long he can hang from it or even do pull-ups.  Also, do wheelbarrow walks or push-ups with him.  Something funny is the Superman pose, where he lays on his stomach and lifts his hands and feet as if he’s flying and tries to hold it for at least 10 seconds.  When his balance is good, he can try it on an elevated surface like a chair (with adult supervision of course!).

If all else fails, 30 second pillow fights with 20 second rest periods.  🙂