Chloe is a very good friend of mine, who just happens to be living with Autism. Chloe has provided me with a great deal of invaluable insight that has helped me to better understand my own kids. I value her opinion greatly and I very much support the message she is delivering in the following post. 🙂

My name is Chloe Rothschild. I am a young adult who has Autism. I write for www.special-ism.com. I advocate for Autism. I want to help people understand Autism better. Rob asked me if I wanted to write a guest post and of course I said I would be happy to. J

The shooting in Connecticut was shocking, heart breaking, awful, horrible, tragic and so much more. When I first heard about the shooting, I was so sad for all of the people that died, especially for the little kids who barely had lived life yet. Little kids who would not get to open up Christmas presents this year.

Most of all, I didn’t understand why someone would do something as awful as shoot school staff, and kids, and anybody for that matter. It made no sense to me. I wondered why everyone in the world just couldn’t be nice to each other and get along.

Then, not long after I heard of the shooting, I had heard the talk about the shooter having Asperger Syndrome, which is on the Autism Spectrum. This kind of made me nervous because it worried me that others would start to be afraid and fearful of those who have Autism.

I feared that people would start to perceive anyone who had Autism to be violent, just because it was said that the shooter, one person had Asperger’s Syndrome and was violent. We don’t know if Lanza had Asperger Syndrome or not. But what we do know is that every individual who has Autism is different. Individuals with Autism that I know are so sweet, kind, caring, loving, and amazingly wonderful, successful human beings.

A day goes by, I go on Facebook like I always do, and I see a screenshot,  the screenshot which is below made me SICK! I was scared, terrified. I could not believe how ignorant and sick someone would be to say such a thing, as what was said. Before I went to school the next day, I said, “Mommy, do you promise no one will set me on fire at school today?

As if the first screenshot wasn’t enough, I saw another one posted on Facebook, one that made me just as upset. I don’t understand why people would say such things, I mean I know they are upset about the shooting, and so am I, but don’t blame it on Autism. Don’t try to or even say you want to hurt individuals who have Autism, we had nothing to do with what Adam Lanza did, we are nothing like him, so please don’t be afraid of us. 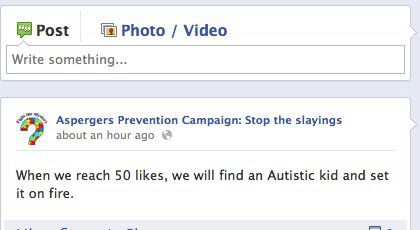 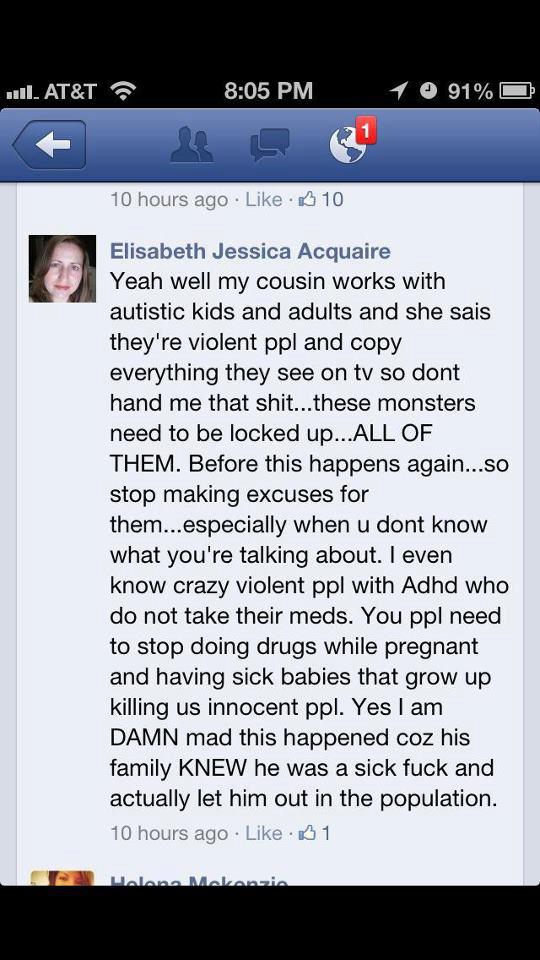 The pictures below of me are happy pictures: This is the sweet innocent side of Autism. 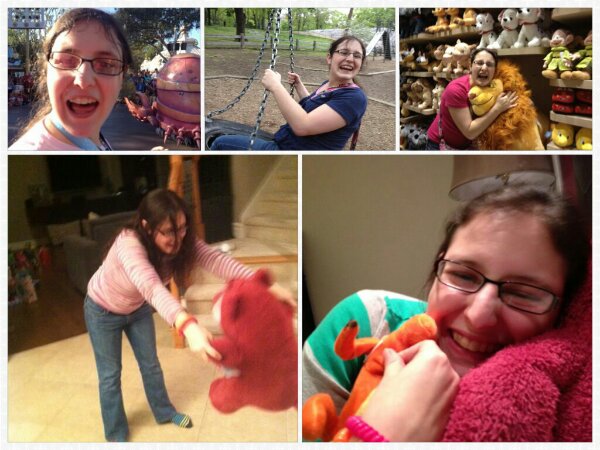 And since I don’t want to end my guest post with everyone sad, here is the video that gave me some much needed positive energy that I needed.

Unfortunately a large part of the problem is that whenever the mainstream media covers things, it’s always about the bad side of things and that’s what influences people to make ignorant assumptions like that facebook poster.  And just because her “cousin” works with the troublesome ones, then all of them must be violent “monsters”!  (/sarcasm)  It’s why I stopped watching the news; it’s too damn depressing.  I really hate the judgmental ignorance of some people.

I hope this doesn’t come out the wrong way.  I personally would love to hear more about what contributions people on the spectrum make to our society.  From what I understand (please correct me if I’m wrong), autistic brains are wired “differently than normal” and I think that gives them a unique way of looking at things.  While I may not understand what goes on from their perspective, I’d welcome a different way of looking at something.

It’s why I read Rob’s blog.  While I admit I am very fearful of what is going to happen with Gavin, I know Rob and Lizze are doing their best to give him all the help they can to keep him from becoming one of  “these monsters that need to be locked up”.  Gavin could be capable of great things when he gets older and he deserves a chance to shine.  And the same goes for Elliott and Emmett.  🙂  It’ll be interesting to read their posts when they get older, just like yours Chloe.

And I liked your pictures.  🙂

This is a very moving post. Chloe has given me a view into the world of an Adult with autism. I have more hope for our baby girl as she grows up. Having said that… the screen shot made my blood boil. How cold she have such a poor view of autistic people when she hasnt taken the time to even do her research. GRRRRRR!!!! JUST MAKES ME SO MAD!!! I just want to hold my baby girl closer and closer when i read things like this :'(

@JrjKmj it’s frustrating for sure. This is why I do what I do. By working together we can educate the ignorant.

@lostandtired  @JrjKmj  I so much so appreciate what you do Rob!

Wow… awesome post Chloe! Rob thank you for having her share this with me… What makes me mad is that woman judging all Autistics by something one person who was not even diagnosed Autistic did; and by what her “cousin” said. Yes, some folks with ASD can be violent, but 9 times out of 10 – as you and I well know, that violence turns inward. Very powerful post – EVERYONE needs to read this!!!

@Chloe123 you are more than welcome. I’d love to have you post more regularly. 🙂

@elizabethtaylor202 Thank you for your wonderful comments! 🙂