When your child says “I want to kill myself”

Gavin is leaving for his grandparents tonight

I forgot to let you know how the appointment with Geek Squad went the other day.  To refresh your memory, we had to Geek Squad come out and service our TV while the warranty was still good.  There are black bands that appear on the screen now and they have been getting worse over the last year or so.

Geek Squad came out and determined that the LCD panel is bad and needs replaced.

He ordered the panel while he was standing there.  They are scheduled to install it on the 12th of this month.  However, and this is what I’m absolutely hoping for, there is a good chance that the replacement panel isn’t available anymore.

I’m really hoping it works out this way and I think it probably will because this TV is already 4 years old.

Of course I’ve have already picked out a replacement and basically, the closest comparable model for the same price is a 60″ LED and I’m in love with it.  OMG, I’m trying not to be too excited but holy crap, this just may happen.

I had a 60″ LED projection TV about 5 or 6 years ago.  It was amazing and we were in a better situation at the time.  However, I sold the TV to cover some emergency, Gavin related expenses and it would be so cool to be able to get this new one, especially for FREE.

Word case scenario is that our current TV gets fixed.  I suppose it’s really a win win but it would really need nice to catch a break on this one.  🙂

On the plus side, the fact that someone came out to the house was cause for me to make sure it was clean.. Gavin and I put a lot of work into straightening up and it looks pretty darn good.  At least there’s that.  🙂

To all my techy friends out there, I keep trying to explain to Lizze that there is no such thing as a TV that’s too big.  I mean,  too big and TV don’t even belong in the same sentence.  Am I right? Of course I’m right!   60″ is not to big, especially since we have the room.. 🙂 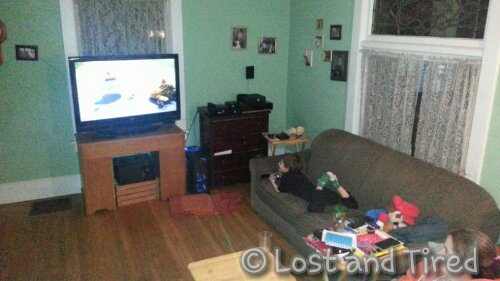 From what I can work out – if they give you a voucher, chit, gift card or whatever to buy a tv, you but a tv. Maybe you bundle some tv-related accessories like a PVR or an x-box/playstation/wii.
So long as you can sit a reasonable distance away from it – then it’s not too big. Looking at your photo, you can go at least 25% bigger 😀

@ImaWestie that’s what I’m talking about 🙂

How about purchasing a decent mid priced TV and saving the rest for upcoming birthdays or things you might need such as modems, phone accessories etc. down the road – thereby freeing up the money you would have spent on those things for groceries, gas etc. Just a thought!

So I hate to suggest this, because I am a big fan of the luxuries we can get.  But I personally, would get a decent mid priced TV and sell the ballence of the Best Buy gift card to help cover Lizzy’s expenses when she goes into the pain clinic.  To me that would be the best use of the funds.

And I used to believe there was a reasonable size for TV’s but my hubby convinced me otherwise.  No tv is ever too big.

@MeganCKitchen you make a very good point. However, selling a gift card, let alone a used one will be very difficult to do. I’ve tried that before and it’s nearly impossible, at least in my experience, unless you know the person you’re selling it to.
Assuming insurance covers the actual treatment, we’ll have the rest covered with tax return. I’m already done with my taxes and waiting till I can actually file.