The Lighter side of #Autism: Snug as a bug

I received a call from Best Buy today.  They were letting me know that the TV was being replaced.  This was really exciting and we went right away.

I had to bring in out defective one and they were going to swap it out with a comparable model.

This didn’t go as planned because all the TV’s they had to swap it with were basically downgrades.  Even though our TV was valued at $1,200 when we bought it, they would only give us a replacement TV valued at basically $700.

Anyway, it eventually worked out because we were able to get another LG, which is good.

This is still 47″ (Elliott was really bummed out cause he wanted bigger) but LED instead of LCD.  It’s also only about 1″ thick and it actually works.

The really cool part is that not only did I get the TV for free but I was able to also get the 4 year replacement plan again and still walk out of the store with $11 in store credit.

All in all, I’m really grateful for Best Buy working this out for us.

It was cool because Emmett was a part of the process from start to finish and he really enjoyed that.

He helped me pack up and carry out our old TV and carry in, unbox and install our new one.  He put the screws into the stand and tightened them up.  He found the power button and turned the TV on.

He was also kind enough to make sure that his game still played on the XBOX 360.  🙂

The only this I don’t like is that this is a more basic model compared to what we had. It’s got fewer ports and the TV doesn’t swivel on the stand.  However, like I said, it works and it was right inside my price range, which was free.

Thank you Best Buy for making this work and for doing this in a timely manner.

My favorite part about this was the time I got to spend with Emmett.  He is a fantastic Daddy’s little helper.  🙂 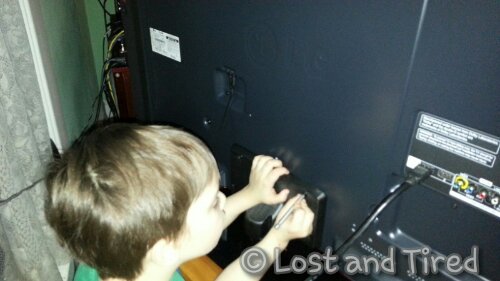 Receiving a free television sounds like it was just icing on the cake (compared to your helper)! It sounds like everything worked out for the best and you will have a great memory from the experience. It’s always great when a plan comes together (even though it wasn’t bigger than a 47″ model)
Aaron 🙂