Thou dost protest too much

The slower side of busy

Thou dost protest too much


I’m going to say this one more time, I HATE the new wordpress app for android.  This is now the 3rd attempt to update you all as to what happened at Lizze’s OB/GYN appointment at the Cleveland Clinic.

In a nutshell, Lizze loves her new doctor.

The new doctor believes that Lizze is pre-menopausal  but there is also a chance it’s PMDD. A ton of bloodwork was ordered and then subsequently drawn.

Lizze goes back in 4 weeks and we’ll have a better idea of what’s going on.

Here’s where things got ugly.

Lizze’s previous OB/GYN, the one that delivered both boys and preformed her two surgeries, including her hysterectomy, is refusing to turn over her records.

I never shared this but Lizze went the other day to pick up her records from her old doctor so she could bring them with us today. Her records are literally 3+ inches thick and they are charging us $1.50/page. We can’t afford that so Lizze had to walk away.

The Cleveland Clinic told us not to worry about it because they will go after the relavent records, all we had to do was sign a release.

While Lizze was standing there, the staff called and spoke to her old doctors office.  They flat out refused to turn over her records.  Their reason is that we still owe them about $700 from her medically necessary hysterectomy that insurance refused to cover.

We had been sent to collections and honestly, I’ve fallen behind. 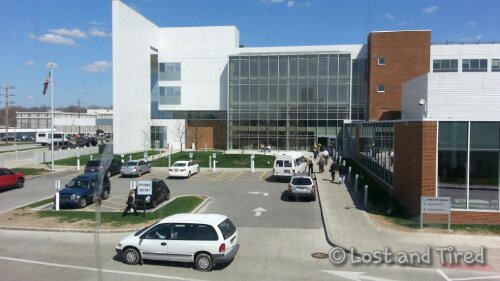 It’s my fault and I should have figured something out  but it’s not like I have nothing on my plate.

They also divulged that information to the nurse at the Cleveland Clinic and said that u til we take care of the balance, they will never release the records.

On top of that, they said that they’re upset because they have invest a great deal of time and money into Lizze and she just left the practice for another doctor.

The truth is that we had to leave because until we had the balance paid off completely, they refused to treat her.  We couldn’t pay the balance off at once and Lizze has been suffering for 2 years and I finally convinced her to move to the Cleveland Clinic.

The staff at Cleveland Clinic’s Mayfield Heights location were completely shocked by the aggressive tone that her old doctors office has taken.

All they wanted were her last lab results and the records from her hysterectomy. That was it. Just a few pages.  Still they refused.

Basically, her new doctor is a bit concerned about why they are protesting so much.

Part of the bloodwork is to make sure that her ovaries are still present.  They were NOT supposed to be removed and there’s no way to know if they are still present without lab work and an ultrasound.  This would be one explanation for why she’s been having these issues since her hysterectomy.

We absolutely loved her old OB/GYN.  He may know nothing about this and it may just be his office manager.

Just so I’m perfectly clear, no one is accusing anyone of doing anything wrong.  With that said, have you heard the phrase,  thou dost protest too much. They are making it appear that they have something to hide.
Who knows? All we care about is helping her to feel better.

I know I dropped the ball and trust me, the guilt weighs heavy, especially now.  However, I’m not sure it even legal to refuse to provide records especially if releases have been signed and we’re dealing g with serious health issues.

I’m not 100% sure of the legalities, but if you owe a balance and are in collections, I think they can charge a fee for the time spent photocopying records and expect to get paid for that in advance. I know it’s important to get the records to the new doc, but it’s far from a life threatening situation.
$1.50 a page is steep, but I would bet it’s within their rights to charge it for someone that far in arrears.

Gurdy I’m not entirely sure. I wouldn’t say that Lizze’s condition is life threatening at all. The problem is that treating may be. She has a history of blood clots and so hormone therapy is very dangerous, so much so that they resorted to the hysterectomy in the first place instead of hormone treatment.
I’m not defending my delinquency at all but I think this is more of an ethical issue at this point.
Her new doctor said the records are necessary at this point. She will just start over and do her own workup. No harm is really done, it’s just frustrating. But..what are you gonna do?
Bigger fish to fry right now anyway. 🙂