The “Did you know’s” of Food #Allergies

I wanted to take a second and update all of you on the current status of our CPS investigation. So far, we have been interviewed and we have signed releases to allow our medical teams to speak with CPS.

If you recall, the allegation lodged against us stated that we didn’t take our kids to the doctors.

I never got the impression that the investigators actually believed the allegations to be true. Our interview went really well and it’s pretty obvious that we take our kids to the doctors.

As our interview was coming to an end, the main investigator said that I would hear from her this week.

To be honest, that makes me nervous and it’s making Lizze physically ill from worry. Rationally I know that these things take time and there could be a million reasons for not calling but when your kids are on the line……………

I do know that they have spoken with Dr. Patti and she backed us up 110%. While shes concerned for us, she’s not concerned about us. Does that make sense?

I’m going to call on Monday and touch base with our CPS investigator and make sure that there isn’t anything else that they need from us.

I won’t be sleeping well until this is over.. 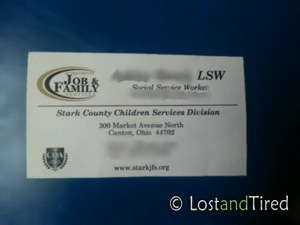 I am so sorry you are all facing this. When will people learn to keep their noses out of other peoples business. It’s pretty obvious from reading your posts that you love your kids that you are not abusive parents and care about your kids’ health and wellbeing. Keeping everything crossed this passes with little fanfare and that it’s noted somewhere official that you DO look to the best interests of your little ones. Wishing you strength and a speedy resolution. take care you guys!

JBJID thank you very much.  We don’t he best we can and while we’re not perfect, I like to think that we are a perfect match for our kids.  🙂

Is there any way this investigation can be “helpful” so to speak by them helping you find more assistance or support if they know you are coping but barely
As you said dr Patti says she is concerned for you. Not about you.
Does CPS have access to extra resources or supoort systems for a family such as yours.
Can you ask for help finding respite or extra resources you may not know about.

p123 that’s the attitude we’ve taken with this.  Unfortunately, because we’re so heavily involved with county organizations already, I don’t know if we’re missing anything.
Having said that,  I think it’s the best approach.  Great advice.  🙂

p123 Once upon a time, CPS gave us some $ for groceries (which allowed us to buy a carpet shampooer cause groceries were covered).  One of the complaints was the house was a mess, we would scrub by hand the carpets to try to clean them after a smearing incident but that would only do so much.  Generally speaking though, their response is “Seems to us you just have a very challenging situation and you are doing all you can to rise up to meet its challenges.  You do what the doctors say, you are on the waiting lists for all the county assistance programs, not much else we can recommend except to try harder at doing everything you’re doing.”  Yeah, those words were very comforting.

LeannaGeorge p123 thank you for sharing your story.  It’s so amazing just how different everyone’s story and experience is.

I know what your wife is going through with her fibro because of the stress. My mom has fibro and I have seen what stress can do, it can increase the pain that they have already.

AMDuser that is absolutely correct.  It’s not fun by any means.  🙁