My teenager with #Autism and #RAD

Seven Ways To Get Your Child’s Obedience

My teenager with #Autism and #RAD

Gavin likes to monopolize the TV while he’s at his grandparents house.  This happens at my parents house as well.  Regardless of what anyone else wants to watch, Gavin claims the remote and watches what he wants.

We’ve spoken with Gavin about this on many occasions.

Elliott was trying to tell Gavin how this made him feel and Gavin was completely blowing him off.  We tried to get Gavin to understand how his actions impact others and he just wasn’t having it.

Gavin’s always been like this but sometimes it’s worse than other times.

Overall this wasn’t a huge deal. However, that changed when he decided to run his mouth to Lizze in response. I’m sick of Gavin doing stuff like this to Lizze and I out my foot down.

This behavior is very typical of a child with Reactive Attachment Disorder.

Gavin will be having oatmeal in the morning but he will also be writing an apology letter to Lizze and Elliott both.  To ensure that he doesn’t just blow this off, I mandated that the letters be at least 50 words long. 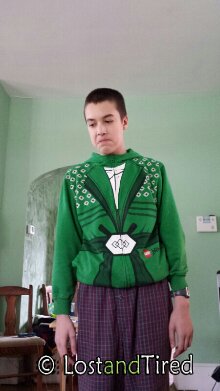 This shouldn’t be a big deal because Gavin loves to write.

My goal is to force him to think about how he’s dismissing other people’s feelings and only thinking of himself.

Before anyone jumps all over me for being insensitive, don’t bother.  I know what I’m doing and I know why I’m doing it.  While Autism certainly plays a role in his behavior, so does Reactive Attachment Disorder.  As he gets older, Autism seems to become less and less pronounced, when compared to his much more serious mental health issues.

Lizze and I need to employ outside the box approaches. That’s the absolute bottom line.

Hopefully, Gavin will learn something from this but I’m not holding my breath.  At least the people impacted by his behaviors see that it’s not acceptable to be treated like that.

I’m just wondering, is there a reason an adult doesn’t take the remote and control the TV so that everyone has a turn?

I don’t see the punishment for disrespecting his mom and blowing off his brothers feelings as insensitive at all. Regardless of any diagnosis your job as a parent is to teach your child to be respectful of others.

I actually think that’s a genius response. Gets him to really think about it. Good daddying, Rob 🙂

I don’t think you were insensitive at all. If I had ever disrespected my mom I know my dad would have expected an apology from me to her. It’s a logical consequence for him to apologize to Lizze and his brothers for his actions. Not harsh or unusual at all.

JoeyCaylorSpencer @Catherine Abida @Wendy Fonseca thank you all for your support.  🙂

JoeyCaylorSpencer @Catherine Abida @Wendy Fonseca thank you all for your support.  🙂

I see nothing wrong with how you dealt with this

I don’t see the punishment for disrespecting his mom and blowing off his brothers feelings as insensitive at all. Regardless of any diagnosis your job as a parent is to teach your child to be respectful of others.

I think you handled it well