#Autism is not an excuse -

I’m so proud of my wife

When it comes to feeding my 3 kids with #Autism and #SPD, presentation is key

#Autism is not an excuse

Gavin’s had a so so kinda day today.  Unfortunately, we closed the day out with a tantrum and series of bad choices.

We held him accountable for not listening and causing trouble.  It wasn’t anything super major but it wasn’t the first time this evening that we had to speak with him about this issue.

The consequence was that he lost his Yugioh cards and will have to earn them back.

Unfortunately, it didn’t stop there. When it was time for his meds, he was threatening to throw them across the floor. That cost him 10 Pokemon cards and he will have to earn those back as well. 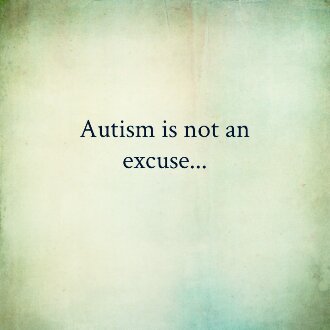 As he stormed up the stairs to get ready for bed, he screamed in Elliott’s face as Elliott was coming down the steps, sending him flying down the steps in a panic. That was very dangerous because we have an open stair case and even if it wasn’t, that’s not acceptable behavior in our house and he knows it.

That earned him oatmeal for breakfast.

He’s been pissed off all day because we stopped him from bossing his brothers around while they played together.  We stripped him of that power and placed the boys in charge of the games they were playing.

We wanted Gavin to understand what it’s like to be in their shoes.  He didn’t like it and we had to constantly remind him of his role during playtime this afternoon.

I think that it all came to a head this evening.

Some may think that we are being too hard on him.  I disagree.

You see, I want him to reach whatever potential he’s capable of.  I want him to be as independent as possible. In order for that to happen, he needs to accountable for his actions. It’s as simple as that.

He needs to learn that the world doesn’t revolve around him and that his actions can affect those around him.

Gavin doesn’t really possess a functional moral compass or common sense and so we have to essentially train him.  That’s not meant to be degrading or anything like that.  It’s just the reality of the situation.

Sometimes doing what’s best for your special needs child won’t win you any popularity contests because quite often the measures needed to address a situation may seem unusual or even harsh.

The truth is that I don’t know any special needs parent that feels good about having to hold their child accountable.  Many times it so much easier to simply let things go because we feels so bad about all the challenges our kids face.

While that approach is appropriate at times, that doesn’t negate the need to hold them accountable for their actions.  It doesn’t matter that they are Autistic or have Reactive Attachment Disorder, as is the case with Gavin.  The world will not cut them any slack and I feel it’s necessary that we prepare our kids for that reality.

Obviously, I’m not suggesting that a child be punished for something outside of their control.  I’m suggesting that we remember that our kids, while special needs, are still just kids.  They are going to push the boundaries, misbehave, test the limits and just like any other child, there are consequences.

I believe that the consequences should be real and unpleasant but at the same time be developmentally appropriate.  I do not support any form of corporal punishment whatsoever.

Before I closed the door to Gavin’s room, I reminded him that tomorrow is a new day, a clean slate and that we love him.

I have 2 special needs boys 1 Autistic the other has Adhd CAPD and OCD I am harder on them then anyone else and the reason is LIFE ISNT GOING TO BE EASY FOR EITHER OF THEM and if i dont make sure they get it now they never will My oldest is 15 .5 5ft 10 and 190 LBS and He is the Autistic 1 i had to get my bluff in on him at an early age because if i hadnt his agression now might kill me SO YOU ARE DOING IT RIGHT DAD even my Autism specialist says the reason we have made it this far with my older son whos original dx was mod to sever but has been change is because I dont treat him like a disabled kid He has rules he has responsibilities and goals SO KEEP DOING WHAT YOUR DOING

I agree with you. I have family that try to stop us from disciplining our autistic/PANDAS kiddo for out of control behaviors, saying he can’t control himself because he is sick with lyme disease. I understand the sick part, and he is under treatment for it.  Well, do you really think the outside world will know that if he displays that type of behavior at 18 years old? No, they won’t be so kind, and if he can’t control his anger, he may end up tangling with law enforcement.

gosh Rob, just reading this i am exhausted…good for y u for holding your ground and implementing these consequences……get a good nights sleep for i have a feeling oatmeal for breakfast will not go over well!!! stay strong!!!!