I'm a special needs Dad struggling with his feelings -

I’m a special needs Dad struggling with his feelings

Something that I feel very strongly about is that it should be okay to feel the way you feel. Wow.. That’s a lot of feels.

When it comes to being a special needs parent, I feel all sorts of things ranging from basic exhaustion, frustration and anger, all the way up to the big one…resentment. 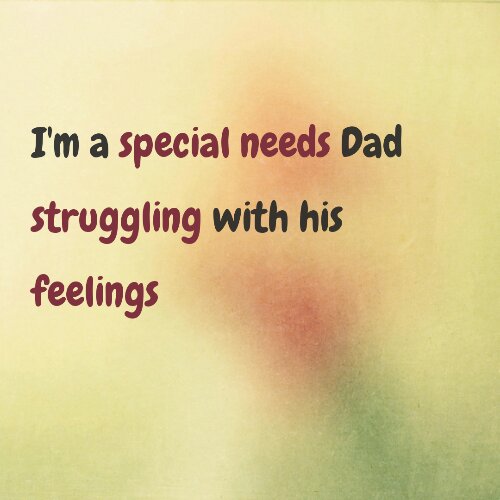 Recently I have found myself at odds with those beliefs. Let me explain what’s going on and then I welcome your thoughts in the comments below.

My oldest son Gavin has me feeling rather torn on a great many issues.

For those new to this blog, I’ll give you some real quick background.

Gavin was diagnosed with Aspergers back in 2005. He’s since had things like Bipolar disorder and most recently, Reactive Attachment Disorder added to his lengthy list of mental health challenges.

Our biggest struggles stem from the Reactive Attachment Disorder.

Gavin doesn’t really make connections.  His relationships are mostly superficial and self-serving. This means that he’s closest to those that are of benefit to him. He’s not capable of caring for or loving his family the way that most people would.

He thrives on creating chaos and splitting or pitting people against each other. If there’s something that he wants, he doesn’t care who he has to hurt to get it.
If this sounds bad, imagine living this every single day.

Here’s where I really struggle emotionally with this.
I fully understand that this condition is completely outside of his control. He didn’t ask to be this way.  Having said that, his behaviors are a major problem.

He chooses to do the things that he does to hurt people, especially his family. The real world dictates that’s regardless of his mental health, he’s responsible for his actions and I fully support that.  There are no free passes given here.

The truth is that I’m angry with him for hurting us. Not physically per say, this is all psychological (think head games).

For example, he loves doing things to make his younger brothers fight and then sitting back and watching his handy work. This is the God’s honest truth. It sounds unbelievable but it happens all the time.

As I said, I’m angry at him for what he’s doing but part of me feels guilty because on the most basic level, this isn’t his fault.

Having said that, the impact of his behaviors are very real and very damaging. No one’s making him choose to hurt his brothers or his mom, he’s doing that on his own.

How do you reconcile this?

I believe firmly that he’s must be held accountable for his actions, especially if someone is victimized. He has to understand that his actions have a very real impact on the people around him and thus there are consequences.

The problem is that he never learns from his mistakes and at the end of the day, he doesn’t care that he hurt someone, he cares that he got caught.

How do you address something like this? This is seriously messed up stuff.

Trying to reconcile what is within his control and what isn’t is damn near impossible.  Even if we could identify with absolute certainty what is what, does that lessen his culpability, especially if someone gets hurt?

I drive myself crazy trying to not only come to terms with who he’s become but how to fairly address his behaviors.

The overall safety and wellbeing of everyone has to take priority.

This is sorta like a chicken and the egg kind of thing for me. If he didn’t have Reactive Attachment Disorder, would he be doing these things? Would he be prone to doing these thing anyway.  Perhaps, the fact that he simply doesn’t care, makes it easier to hurt people with no remorse.

Today has been one of those days where there is no escaping the impact of his behaviors.

I’m lost.  I’m tired.  I’m completely overwhelmed and my sanity feels like a melting ice cube.  I can feel it slowly but surely melting away.

I wouldn’t wish this on anyone. It’s truly a wonder we make it through the day sometimes.

accidentally deleted a comment.  I’ll restore it as soon as I get to my computer. Sorry.  Meaghan1985

The word scapegoat comes to mind. Once again, Gavin gets blamed for everything.
If you believe so much in accountability, do you ever hold YOURSELF or YOUR WIFE accountable for any of the problems your family has?