We survived a massive tantrum tonight

I put my pants on one leg at a time

We survived a massive tantrum tonight


Gavin had a massive blowout this evening. This particular tantrum was very violent, loud and full of self-injury.

Perhaps it would be best to start at the beginning.

The boys were all playing together.  Everything seemed to be going well.  At some point things took a turn and Gavin began having behavioral problems. 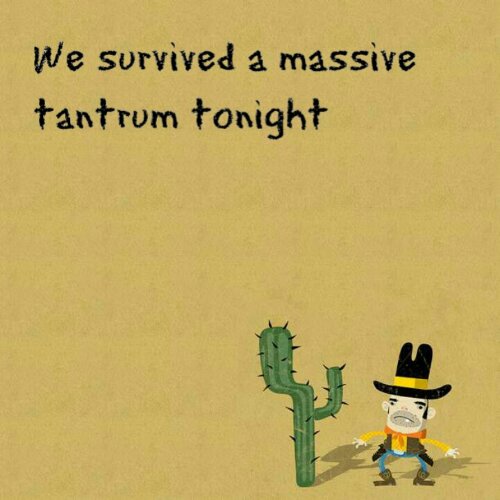 There was no apparent trigger, he simply turned.

When Elliott asked him to stop again, Gavin responded by chucking the Smurf at Elliott as hard as he could.

Gavin openly admits to doing this but has no explanation as to why and simply stares at us, as though it was no big deal.

Lizze and I sent the boys upstairs and we confronted Gavin about what he had done.  He showed absolutely no remorse and only became upset upon hearing the news that he was being punished.

We tried to explain to him why this was such a problem but he wasn’t listening, he was too pissed off that we were holding him accountable for his actions.

His tantrum was all drama.  He would look right at us as he punched himself in the head, scratched his face, forehead and legs up. He bit himself over and over, leaving bite marks. He was looking for a reaction and we didn’t give it to him. This caused him to escalate, in a bid to get a reaction.

He kicked over two tables, stomped on the floor and screamed at the top of his lungs.

When he finally realized that we didn’t care and he wouldn’t be able to manipulate us, he simply stopped.

The whole thing lasted roughly 30 minutes, give or take.  In that 30 minutes he managed to terrorize his little brothers and assault himself, over and over again.

On the positive side, he didn’t lash out at anyone during this time and that’s always a good thing.

Keep in mind that this is a tantrum and not a meltdown. There is a very distinct difference between the two.

I’m really hoping to see tomorrow bring with it some better behavior and better choices.  We’re here to help Gavin grow and learn and while this is proving to be a challenge, it’s a challenge worth undertaking.

We’ve never given up on Gavin and never will.

popfire627 lukesmama JBJID timtoomey Silachan Sorry I’m late replying.  As far as retraining him goes, we’ve only had to do that a few times.  It can be done and done safely but we don’t like to.  Part of the problem is that he’s trying to get a reaction from us.
We’ve been told by all his psych doctors not to intervene unless it’s unsafe to those around him. Otherwise we are giving him what he wants.
One of the things we do is sorta make him restrain himself.
When he’s having a tantrum, we have him sit like a pretzel. This helps him to not kick anyone or anything. If his hands are unsafe we have him sit on his hands. As soon as he’s being safe, he can uncross his legs and get off his hands.
This is our preferred method because it doesn’t require us to be physical with him.
This also puts everything on him.  As long as he’s throwing a tantrum, these safety measures are enforced. As soon as he stops, they stop.
As far as the psychotic break playing a role in this particular incident, I truthfully don’t know.  That is a good question though.

That’s what I was thinking.
Non

Have you guys taken non violent crisis intervention training? Violence against self or others = restraint in my house. The restraint is not aggressive but it is uncomfortable, thus not rewarding.

Again I find I have no words I’ve not experienced this at all. I don’t know how you cope but I’m glad you can and do.

I’m wondering how you handle an escalating, self injurious meltdown.
Let’s say he keeps hurting himself, and it becomes non-superficial.  At what point do you intervene?  If you need to restrain him, how do you do so?  Have things ever hit this point for you, and if so, does it feed into his need to get a reaction?
I don’t know how big he is, but I could see this becoming a MAJOR problem as he hits his later teenage years.

Just food for thought- with the recent psychotic episode you guys have been dealing with with him, is there a chance that might be the reasoning behind the violence to the stuffed animal? Not that it makes it excusable- when told to stop he should stop, and you did the right thing. Just a little wonder I had.